The Indian Premier League (IPL) is a professional league for Twenty20 cricket competition in India. It was initiated by the Board of Control for Cricket in India (BCCI), headquartered in Mumbai,[3][4] and is supervised by BCCI Vice President Rajeev Shukla,[5] who serves as the league's Chairman and Commissioner. It is currently contested by 10 teams consisting of players from around the world. It was started after an altercation between the BCCI and the Indian Cricket League.[6]

In 2010, IPL became the first sporting event ever to be broadcast live on YouTube in association with Indiatimes.[7] Its brand value is estimated to be around $3.67 billion in fourth season.[8][9] According to the Annual Review of Global Sports Salaries by sportingintelligence.com, IPL is the second highest-paid league, based on first-team salaries on a pro rata basis, second only to the NBA. It is estimated that the average salary of an IPL player over a year would be $3.84 million.[10] 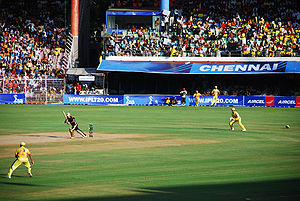 A Chennai vs Kolkata match at the M.A. Chidambaram Cricket Stadium won by Chennai Super Kings.

The inaugural season of the tournament started on 18 April 2008 and lasted for 46 days with 59 matches scheduled, out of which 58 took place and 1 was washed out due to rain. The final was played in DY Patil Stadium, Nerul, Navi Mumbai. Every team played each other both at home and away in a round robin system. The top four ranking sides progressed to the knockout stage of semi-finals followed by a final. Rajasthan Royals defeated Chennai Super Kings in a last ball thriller and emerged as the inaugural IPL champions.

The 2009 season coincided with the General Elections in India. Owing to concerns regarding players' security, the venue was shifted to South Africa. The format of the tournament remained same as the inaugural one. Deccan Chargers, who finished last in the first season,were big underdogs, but came out as eventual winners defeating the Royal Challengers Bangalore in the final. Deccan set a target of 144 with the help of Gibbs(53) and defended it.

The third season opened in January 2010 with the auction for players. 66 players were on offer but only 11 players were sold. In this season, Deccan Chargers did not play at their preferred home location of Hyderabad, India due to the ongoing political crisis in the Telangana region . The new bases for the champions this season were Nagpur, Navi Mumbai and Cuttack. Four teams qualified for the semi-finals. The first semi-final was won by Mumbai Indians who defeated Bangalore Royal Challengers by 35 runs. Chennai Super Kings defeated Deccan Chargers in the second semi-final. The final was played between Chennai Super Kings and Mumbai Indians. Chennai Super Kings won by a margin of 22 runs. 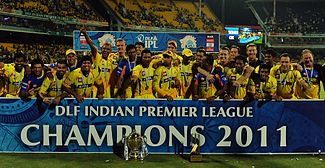 Chennai Super Kings are the most successful team in the tournament winning the championship twice and qualifying for the top four every time.

On 21 March 2010, it was announced in Chennai that two new teams from Pune and Kochi will be added to the IPL for the fourth season. However, the bid around the Kochi franchisee turned controversial resulting in the resignation of minister, Shashi Tharoor from the Central Government and investigations by various departments of the Government of India into the financial dealings of IPL and the other existing franchisees. Later, Lalit Modi was also removed from IPL chairmanship by BCCI. On 5 December 2010, it was confirmed that Kochi will take part in the fourth season of IPL.[11]

The addition of teams representing Pune and Kochi was to have increased the number of franchises from 8 to 10. The BCCI originally considered extending the tournament format used in previous season to ten teams, which would increase the number of matches from 60 to 94. Instead, the round-robin stage of the tournament was to have been replaced by a group stage with two groups of five, limiting the number of matches to 74.[12] But this format was replaced by another one in which each team would play 5 other teams in a two-way round robin format and there would be 2 teams against whom they would play only at home and remaining 2 teams against which they would play only away matches.Thus each team plays 14 matches.Top four teams would qualify for the semi-finals.

In October 2010, the Rajasthan Royals and Kings XI Punjab had their franchises terminated for breaching ownership rules. The new Kochi franchise was also issued a warning to resolve all their ownership disputes.[13] Two months later both teams were finally allowed to take part in the 2011 edition after a court ruling.[14]

Chennai Super Kings won their second consecutive IPL title after defeating Royal Challengers Bangalore by 58 runs in the fourth season of IPL.[15] CSK had beaten RCB in the playoffs too while RCB defeated Mumbai Indians to reach the final. This is the first time a franchise has won two IPL titles, had four consecutive semi-final visits, come to the finals three times, and successfully defended their title. The top four teams namely CSK, RCB, KKR and MI have also qualified for the Champions League. Chennai Super Kings are the current Champions League Twenty20 champions.[16]

The diamond-encrusted trophy of DLF Indian Premier League (IPL) Cricket was designed by Orra brand, owned by Antwerp-based Rosy Blue Group. It comprises a player in a gold leafing. He is shown holding a bat in his hand, next to a map of India. On the map, the names of all the IPL teams have been engraved by rubies. It took a team of as many as 14 craftsmen to make the trophy. Every year, the winners of the IPL T20 tournament are presented with a replica of this trophy, along with the prize money.

A new trophy has been designed for IPL 4 in view of the two new teams which are now in the fray. It has been changed to a large cup instead of a map of India.

On 21 March 2010, Pune and Kochi were unveiled as the two new franchises for the fourth edition of the Indian Premier League. The base price was $225 million. While Pune was bought by Sahara Adventure Sports Group for $370 million, the Kochi franchise was bought by Rendezvous Sports World Limited for $333.3 million. The process was to have been completed on March 7 but was postponed by two weeks after many bidders and the BCCI objected to stiff financial clauses.[19] The second franchise auction fetched total $703 million.

There are five ways that a franchise can acquire a player. In the annual auction, buying domestic players, signing uncapped players, through trading and buying replacements.[20][21] In the trading window the player can only be traded with his consent. The franchise will have to pay the difference between the old contract price and the new contract price. If the new contract is worth more than the older one then the difference will be shared between the player and the franchise selling the player.[22]

Some of the Team composition rules are:

Some of the differences to international Twenty20 cricket:

The total spending cap for a franchisee in the first player auction was US $5 million. Under-22 players are to be remunerated with a minimum annual salary of US $20,000 while for others it is US $50,000. The most expensive players in the IPL to date is Gautam Gambhir of India fetched the highest price of $2.4 million from Kolkata Knight Riders at the auction for season 4

The first players' auctions were held on 2008. The IPL placed icon status on a select few marquee Indian players. These players were Rahul Dravid, Sachin Tendulkar, Saurav Ganguly, Yuvraj Singh, and Virender Sehwag. VVS Laxman initially named an icon player, later voluntarily opted out of his icon status to give his team (Deccan Chargers) more money to bid for players.[23] For the second season, auctions were also held, but free signings taking place in the off-season by franchises led to calls for a draft-like system where the lowest ranked teams would be given a first opportunity to sign players.

The IPL is predicted to bring the BCCI income of approximately US$1.6 billion, over a period of five to ten years. All of these revenues are directed to a central pool, 40% of which will go to IPL itself, 54% to franchisees and 6% as prize money. The money will be distributed in these proportions until 2017, after which the share of IPL will be 50%, franchisees 45% and prize money 5%. The IPL signed up Kingfisher Airlines as the official umpire partner for the series in a

106 crore (US$21.5 million) (approximately £15 million) deal. This deal sees the Kingfisher Airlines brand on all umpires' uniforms and also on the giant screens during third umpire decisions.[24]

8,700 crore (US$1.76 billion) for 10 years. One of the reasons for payment of this huge amount is seen as the money required to subsidize IPL's move to South Africa which will be substantially more than the previous IPL. IPL had agreed to subsidize the difference in operating cost between India and South Africa as it decided to move to the African nation after the security concerns raised because of its coincidence with India's general elections.

On 4 March 2010 ITV announced it had secured the United Kingdom television rights for the 2010 Indian Premier League. ITV will televise 59 of the 60 IPL matches on its ITV4 free to air channel.[28]

On April 1, 2011, Rogers Sportsnet announced that it signed a four year exclusive deal in Canada to broadcast 36 group stage matches, 3 playoff matches and 1 championship match on Rogers Sportsnet One.[29]

India's biggest property developer DLF Group paid US$50 million to be the title sponsor of the tournament for 3 years from 2008 to 2010.[34]

Other year sponsorship agreements include a deal with motorcycle maker Hero Honda worth $22.5-million, one with PepsiCo worth $12.5-million, and a deal with beer and airline conglomerate Kingfisher at $26.5-million.[35]

There are disputed figures for the profitability of the teams. One analyst said that four teams out of the eight made a profit in 2009.[38] While the The Times said that all but Kings XI Punjab made a profit.[39]

In 2010, the IPL expects to have 80 official merchandising deals. It has signed a deal with Swiss watchmaker Bandelier to make official watches for the IPL.[40]

DCI Mobile Studios (A division of Dot Com Infoway Limited), in conjunction with Sigma Ventures of Singapore, have jointly acquired the rights to be the exclusive Mobile Application partner and rights holder for the Indian Premier League cricket matches worldwide for the next 8 years (including the 2017 season). Recently[when?], they have released the IPL T20 Mobile applications for iPhone, Nokia Smartphones and BlackBerry devices. Soon it will be made available across all other major Mobile platforms including the Android, Windows Mobile, Palm & others.[42]

The IPL negotiated a contract with the Canadian company Live Current Media Inc. to run and operate its portals and the minimum guarantee has been negotiated at US $50 million over the next 10 years.[43] The official website of the tournament is www.iplt20.com.

Incorporating popular forms of social media into the third season of the IPL, the website now contains a more holistic presence across all online mediums. The website apart from featuring new additions to empower user interaction, has encouraged a wider range of websites around IPL like,IPL Tracker [2] and IPL Mag [3] amongst other more traditional reporting websites.

The third season of the IPL saw interest rise dramatically in the United Kingdom, due in part to telecasts being moved from the subscription-based Setanta Sports to the free-to-air ITV4. James Macleod stated, "We are delighted with the viewing figures for the IPL so far". Lalit Modi, then Chairman and Commissioner, also expressed immense satisfaction on the way IPL has been accepted by the British audience. "ITV beats Sky Sports over the weekend in number of viewers. This is great going. The ITV numbers are double that of rugby league. This is huge by all imaginations. UK figures for viewership on ITV already 10 times that of last year. This is just fantastic news," he said.[44][45]