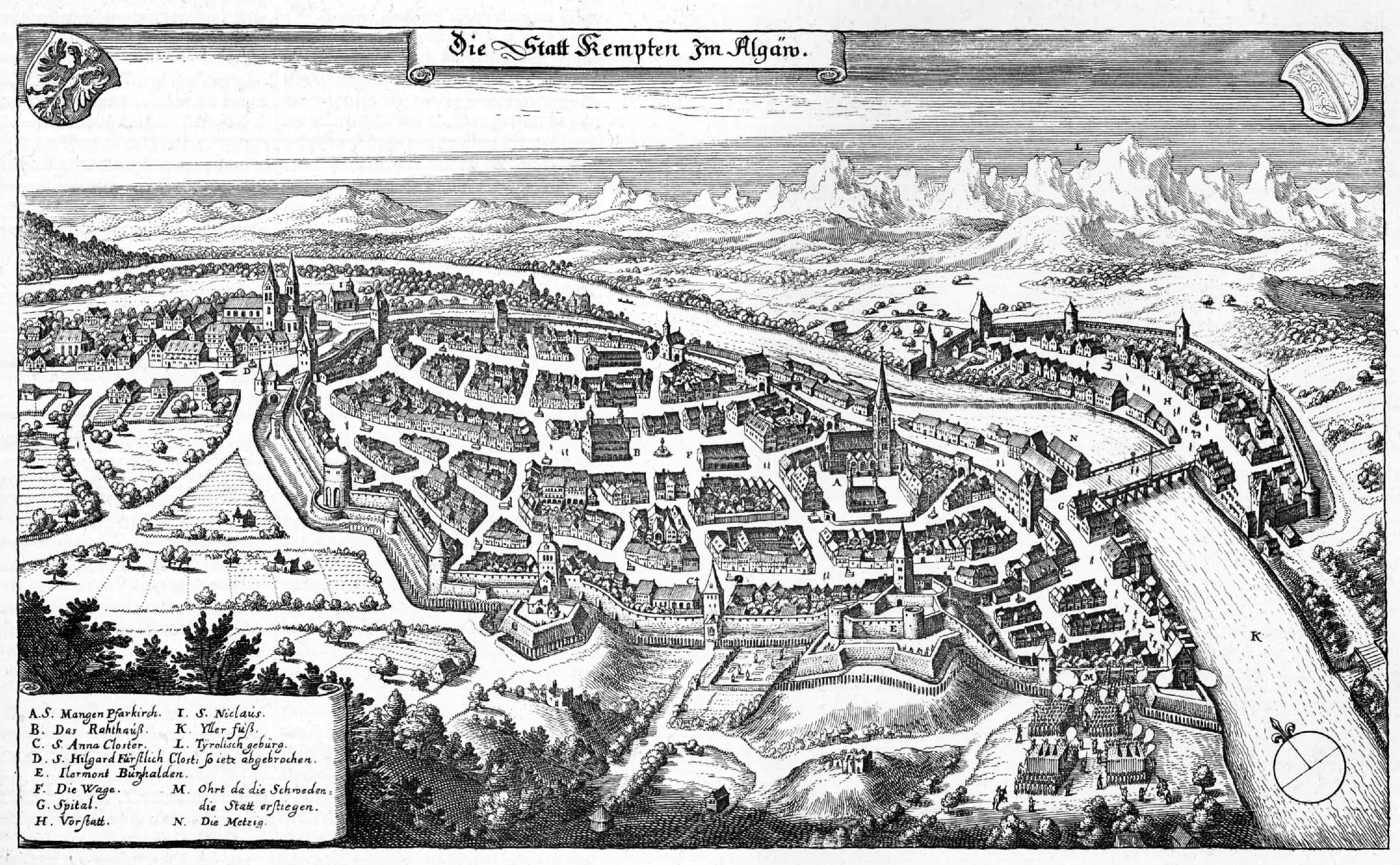 Kempten im Allgäu is the largest city in , a region in the south-west of , . Population was c. 61,000 in 2006. The area was possibly settled originally by s, but was later overtaken by the Romans, who called the town "Cambodunum". Archaeologists consider Kempten one of the oldest urban settlements in Germany.

The Greek geographer mentions in 50 BC a town of the Celtic Estiones named "Kambodunon". This is considered the oldest written reference of any German city. So far no archaeological evidence could be found that this Celtic settlement really existed.

In Roman troops led by and his brother conquered and destroyed an existing Celtic city. Later the settlement was named "Cambodunum". In the following years the city was rebuilt on a classical Roman city plan with baths, forum and temples. Initially in wood, the city was later rebuilt in stone after a devastating fire that destroyed almost the entire city in the year AD 69. The city possibly served as provincial capital of during the first century before took over this role. Extensive archeological excavations at the end of the 19th century and again during the 1950s at what were then the outskirts of Kempten unearthed the extensive structural foundations.

The city was again destroyed in AD 233 by the , a c tribe. The original site of Cambodunum was then abandoned and moved to a strategically safer location on the Burghalde hill overlooking the river .

Only in 488 the last Roman troops left the area and the city was entirely overtaken by the Alemanni.

After the Romans abandon the settlement was moved from the hill down to the plains located next to the river Iller. In written sources the town appears as "Cambidano". Being still predominantly Alemannic, the town once more was destroyed by the in 683 as a consequence of the city’s support of an uprising against the Frankish kingdom.

Around 747 a first missionary cell was founded by the Irish monks Magnus and Theodore sent from in to evangelize the area. In the following years a monastery — — was built, the first in the Allgäu region. Audogar was the first abbot of the new Benedictine monastery. Through the financial and lobbyist support of ’s wife Hildegard, an Allemanic princess, the monastery managed to become one of the most privileged monasteries of the .

After several ravages by the , , and also abbot of Kempten, began the rebuilding of the monastery and the city in 941.

In 1213, Frederick II declared the abbots members of the Reichstag and granted the abbot the right to bear the title of Duke. However in 1289, King also granted special privileges to the urban settlement in the river valley, making it an Imperial City. In 1525 the last property rights of the abbots in the Imperial City were sold in the so-called “Great Purchase”, marking the start of the co-existence of two independent cities bearing the same name next to each other. More conflict arose after the Imperial City converted to in direct opposition to the monastery (and "Free" City) in 1527.

Renaissance and Baroque to Modern Age

During the turmoil of the (1632–33), both the cities were destroyed with by the imperial forces and the Swedish troops respectively.

Only shortly after the war the Duke-Abbot Roman Giel of Gielsberg commissioned the two architects and from to build a new parish church and monastery church including a representative Residence for the Duke-Abbots. This church is acknowledged as the first major church construction in after the Thirty Years' War.

During the the Duke-Abbey and Imperial City came under Bavarian rule (1802–03). Finally, in 1819, the two rivalling cities were united into a single communal entity.

The city was the location of a subcamp of the during . [ [http://www.glosk.com/GM/Linde/17283/pages/List_of_subcamps_of_Dachau/84737_en.htm List of subcamps of Dachau] , Glosk.com]

* The St. Lorenz
* The St. Mang Church
* The Burghalde Castle
* The Duke-Abbots' Residence
* The Archaeological Park
* The City Hall and Square
* The medieval Keck Chapel

The city has been connected to the national rail network since 1852 and currently boasts good and rail connections.

There are also three Grammar Schools (Allgäu-Gymnasium, Hildegardis-Gymnasium, Carl-von-Linde-Gymnasium) offering education to the entire region of the Allgäu.