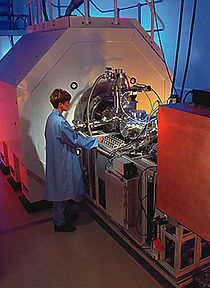 Whole protein mass analysis is primarily conducted using either time-of-flight (TOF) MS, or Fourier transform ion cyclotron resonance (FT-ICR). These two types of instrument are preferable here because of their wide mass range, and in the case of FT-ICR, its high mass accuracy. Mass analysis of proteolytic peptides is a much more popular method of protein characterization, as cheaper instrument designs can be used for characterization. Additionally, sample preparation is easier once whole proteins have been digested into smaller peptide fragments. The most widely used instrument for peptide mass analysis are the MALDI time-of-flight instruments as they permit the acquisition of peptide mass fingerprints (PMFs) at high pace (1 PMF can be analyzed in approx. 10 sec). Multiple stage quadrupole-time-of-flight and the quadrupole ion trap also find use in this application.

Proteins of interest to biological researchers are usually part of a very complex mixture of other proteins and molecules that co-exist in the biological medium. This presents two significant problems. First, the two ionization techniques used for large molecules only work well when the mixture contains roughly equal amounts of constituents, while in biological samples, different proteins tend to be present in widely differing amounts. If such a mixture is ionized using electrospray or MALDI, the more abundant species have a tendency to "drown" or suppress signals from less abundant ones. The second problem is that the mass spectrum from a complex mixture is very difficult to interpret because of the overwhelming number of mixture components. This is exacerbated by the fact that enzymatic digestion of a protein gives rise to a large number of peptide products.

To contend with this problem, two methods are widely used to fractionate proteins, or their peptide products from an enzymatic digestion. The first method fractionates whole proteins and is called two-dimensional gel electrophoresis. The second method, high performance liquid chromatography is used to fractionate peptides after enzymatic digestion. In some situations, it may be necessary to combine both of these techniques.

Gel spots identified on a 2D Gel are usually attributable to one protein. If the identity of the protein is desired, usually the method of in-gel digestion is applied, where the protein spot of interest is excised, and digested proteolytically. The peptide masses resulting from the digestion can be determined by mass spectrometry using peptide mass fingerprinting. If this information does not allow unequivocal identification of the protein, its peptides can be subject to tandem mass spectrometry for de novo sequencing.

Characterization of protein mixtures using HPLC/MS is also called shotgun proteomics and mudpit. A peptide mixture that results from digestion of a protein mixture is fractionated by one or two steps of liquid chromatography. The eluent from the chromatography stage can be either directly introduced to the mass spectrometer through electrospray ionization, or laid down on a series of small spots for later mass analysis using MALDI.

There are two main ways MS is used to identify proteins. Peptide mass fingerprinting (mentioned in the previous section) uses the masses of proteolytic peptides as input to a search of a database of predicted masses that would arise from digestion of a list of known proteins. If a protein sequence in the reference list gives rise to a significant number of predicted masses that match the experimental values, there is some evidence that this protein was present in the original sample. 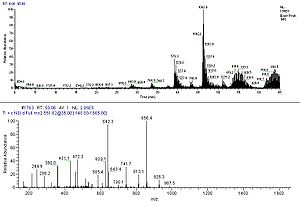 Chromatography trace and MS2 spectra of a peptide.

Tandem MS is becoming a more popular experimental method for identifying proteins. Collision-induced dissociation is used in mainstream applications to generate a set of fragments from a specific peptide ion. The fragmentation process primarily gives rise to cleavage products that break along peptide bonds. Because of this simplicity in fragmentation, it is possible to use the observed fragment masses to match with a database of predicted masses for one of many given peptide sequences. Tandem MS of whole protein ions has been investigated recently using electron capture dissociation and has demonstrated extensive sequence information in principle but is not in common practice. This is sometimes referred to as the "top-down" approach in that it involves starting with the whole mass and then pulling it apart rather than starting with pieces (proteolytic fragments) and piecing the protein back together using de novo repeat detection (bottom-up).

De novo (peptide) sequencing for mass spectrometry is typically performed without prior knowledge of the amino acid sequence. It is the process of assigning amino acids from peptide fragment masses of a protein. De novo sequencing has proven successful for confirming and expanding upon results from database searches.

As de novo sequencing is based on mass and some amino acids have identical masses (e.g. leucine and isoleucine), accurate manual sequencing can be difficult. Therefore it may be necessary to utilize a sequence homology search application to work in tandem between a database search and de novo sequencing to address this inherent limitation.

Annotation peptide spectral library can also be used as a reference for protein/peptide identification. It offers the unique strength of reduced search space and increased specificity. The limitations include the following:

Several recent methods allow for the quantitation of proteins by mass spectrometry (quantitative proteomics). Typically, stable (e.g. non-radioactive) heavier isotopes of carbon (13C) or nitrogen (15N) are incorporated into one sample while the other one is labeled with corresponding light isotopes (e.g. 12C and 14N).[2] The two samples are mixed before the analysis. Peptides derived from the different samples can be distinguished due to their mass difference. The ratio of their peak intensities corresponds to the relative abundance ratio of the peptides (and proteins). The most popular methods for isotope labeling are SILAC (stable isotope labeling by amino acids in cell culture), trypsin-catalyzed 18O labeling, ICAT (isotope coded affinity tagging), iTRAQ (isobaric tags for relative and absolute quantitation).[3] “Semi-quantitative” mass spectrometry can be performed without labeling of samples.[4] Typically, this is done with MALDI analysis (in linear mode). The peak intensity, or the peak area, from individual molecules (typically proteins) is here correlated to the amount of protein in the sample. However, the individual signal depends on the primary structure of the protein, on the complexity of the sample, and on the settings of the instrument. Other types of "label-free" quantitative mass spectrometry, uses the spectral counts (or peptide counts) of digested proteins as a means for determining relative protein amounts.[citation needed]

Characteristics indicative of the 3-dimensional structure of proteins can be probed with mass spectrometry in various ways.[5] By using chemical crosslinking to couple parts of the protein that are close in space, but far apart in sequence, information about the overall structure can be inferred. By following the exchange of amide protons with deuterium from the solvent, it is possible to probe the solvent accessibility of various parts of the protein.[6] Another interesting avenue in protein structural studies is laser-induced covalent labeling. In this technique, solvent-exposed sites of the protein are modified by hydroxyl radicals. Its combination with rapid mixing has been used in protein folding studies.[7]

The FDA defines a biomarker as, “A characteristic that is objectively measured and evaluated as an indicator of normal biologic processes, pathogenic processes, or pharmacologic responses to a therapeutic intervention”. Mass spectrometry enables large-scale discovery of candidates for biomarkers.

In what is now commonly referred to as proteogenomics, proteomic technologies such as mass spectrometry are used for improving gene and protein annotations. Parallel analysis of the genome and the proteome facilitates discovery of post-translational modifications and proteolytic events [8], especially when comparing multiple species. [9]