Kiss Them for Me (film)

Kiss Them for Me (film)

Infobox Film
name = Kiss Them for Me 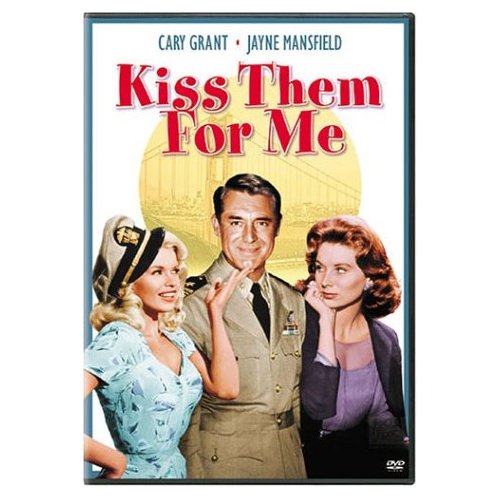 Three decorated Navy pilots finagle a four-day leave in San Francisco. They manage to land a posh suite at a hotel and Commander Crewson (Grant), a master of procurement, arranges to populate it with wine, women and song.

Alice Kratzner (Mansfield) is one of these women, lured to the suite under the false pretense that Crewson has a stash of nylon stockings. Once there, she is naturally attracted to Crewson, but later turns her attention to Lt. McCann (Walston), a married man who also is in the process of running for a Congressional seat back home in Connecticut. If he is elected, McCann can leave the Navy immediately and return to civilian life.

Lieutenant Wallace (Klemperer) tries to get the three pilots, including Mississip (Larry Blyden), to make morale-raising speeches at the plants of shipyard magnate Eddie Turnbill (Erickson), so that Turnbill will vouch for the men with the Navy and also to grease a popular job for himself upon leaving the service. Crewson and his cohorts, however, are physically and mentally exhausted from the war and simply want to enjoy a few days away from it.

Suffering from combat stress and confronted with a number of reminders of the horrors of war, Crewson tries to amuse himself by making a play for Turnbill's attractive fiancée, Gwinneth Livingston (Parker). She resists his advances at first, but ultimately throws her engagement ring in Turnbill's face. Crewson declares his love for her shortly before he and his mates board a plane leaving San Francisco to return to duty.

Grant fought to make this movie, as he wanted to bring out into the open the ongoing problem of what is now labeled , but the studio wanted another "light-hearted war comedy".Fact|date=December 2007

The script points out the differences in attitude and perception between combat veterans and both civilians and those in the military who spend the war safely at home.