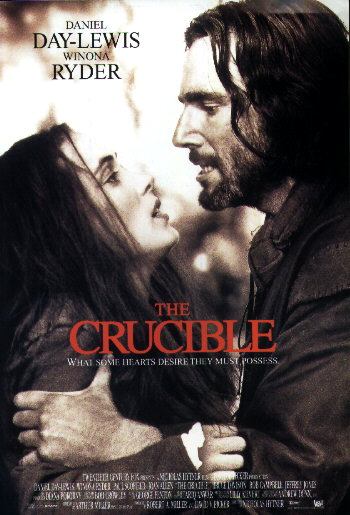 "The Crucible" is a , written by and based on his play of the same name. It was directed by and stars as , as , as Judge , and as .

Miller was nominated for an , with Allen also receiving an Oscar nomination for Best Supporting Actress.

Early morning in 1692 Salem, . All of the young village girls meet in the woods with a black slave from Barbados named Tituba. Tituba begins a ritual and the girls call out the names of men they want to marry. One girl named Abigail does something different. Instead of calling for the man she loves, named John Proctor, she kills a chicken, and drinks the blood, and wishes for Proctor's wife to die. The girls begin to dance (one of them even runs naked) and run through the woods and suddenly are surprised when Abigail's uncle, Reverend Parris (Brendan Bergh) come to them. As the girls scream and run away, Parris' daughter, Betty, falls over unconscious.

Back at Parris' house, Betty will not awaken. Nor will the daughter of Thomas and Ann Putnam, Ruth, who was also dancing. This strikes Mrs. Putnam hard as she has had seven other children before Ruth who died at childbirth. As well as the Putnams, the Parris house is also visited by Giles Corey, who is concerned about how his wife constantly reads books, Rebecca Nurse, who suspects that the children are just acting their sicknesses, and John Proctor. While alone outside with Proctor, Abigail strikes up a conversation with him, revealing that when she worked at his home previously, they had had an affair. Now Abigail still loves Proctor, but he feels that he made a mistake and leaves her. The Putnams and Reverend Parris believe that Betty and Ruth are demonically possessed, so they call from another town the Reverend Hale, who examines Betty, then gathers together the other girls who danced. To save themselves from punishment, Abigail claims that Tituba was working with the devil the entire time. The attention then turns to Tituba who insists on her innocence. When no one believes her, she "confesses" and then she and all the other girls, including Betty, begin naming other women whom they "saw" with the devil. Soon, old drunks, people who curse others, and those who do so much as look funnily at others are accused as witches. Of those accused, three were Rebecca Nurse (accused by the Putnams for the supernatural murder of Mrs. Putnam's babies), Martha Corey (for supernaturally cursing a man so that all the pigs he bought would die), and Elizabeth Proctor, John's wife (accused by Abigail of using a doll to supernaturally give her a stab wound in the stomach).

John, determined not to give his lover in to "vengeance" insists that his servant, Mary Warren, one of the "affected" girls, testify in court that the witchcraft was faked. Although Mary Warren is frightened of Abigail, she eventually agrees. In the court, Francis Nurse gives a list of names of people who vouch for Martha, Rebecca, and Elizabeth's character. The judges responded by ordering the arrest of every person on the list so they could be brought in for questioning. Giles Corey insists that when Ruth Putnam accused Rebecca Nurse, Mr. Putnam was heard to tell his daughter that she had won him a "fine gift of land" (the Nurses' property was coveted by the Putnam family). Corey refuses to give the name of the person who heard this remark, however, as he knows that they will be arrested. The judges order Corey's arrest for refusing to give the name. Meanwhile, Mary Warren insists that she only thought she saw spirits, which was why she screamed and fainted at the trials. John is told that Elizabeth is pregnant and will be spared from death until the baby is born, but he insists on charging the girls of false witness.

The other girls are called in and asked if they were lying about the witchcraft. Abigail pretends that Mary Warren is bewitching them with an icy breeze and begins to pray to God for help. Proctor angrily tells the court that Abigail is a whore, who accused Elizabeth to get rid of her in order to be able to marry him. Elizabeth is called in to see if the accusation is true, however, she does not know that John confessed and lies that the affair never took place, to protect his name. Reverend Hale, who believes now that the girls are lying, attempts to convince the court that Abigail is false, however the girls pretend that Mary Warren supernaturally began to attack them in the form of a yellow bird. The girls run from the courthouse, to a pond and jump in to escape from the "bird".

To save herself from being hanged as a witch, Mary Warren accuses John of forcing her to upset the court and free Elizabeth. John angrily yells that "God is dead!" and is arrested as a warlock. Reverend Hale angrily quits the court. John, Elizabeth, Rebecca, Martha, and the other accused witches are and seventeen are hanged.

On the day before John is to be hanged, Abigail attempts to convince the court that Hale's wife is also a witch, but this ploy backfires on her because the judges believe that a reverend's wife is too clean to be possessed by Satan. Abigail and another one of the girls steal Reverend Parris's money to catch a ship to flee to Barbados, and Abigail asks John to go with her, telling him she never wished any of this on him. He refuses, telling her they will meet again in Hell.

On the eve of John, Martha, and Rebecca's hanging, Parris fears that their execution will cause riots in Salem, as the three are very well-respected citizens. The judges refuse to postpone the executions, but allow John to meet with Elizabeth, to see if she could make her husband "confess", convincing Martha and Rebecca to "confess" in the process. Martha and Rebecca refuse to "damn themselves", but John agrees to. After signing the confession, however, he takes it from the judges, saying that there is no reason for it to be needed, as they saw him sign it and know he confessed. The judges insist that it must be hung up to prove his innocence and John angrily tears the confession, determined to keep his name pure. He is taken away with Martha and Rebecca to be hanged, as Hale and Parris plead with him to change his mind. The three are lead onto a platform where the crowd watches and have nooses tied around their necks. Before being hanged, they recite the , with John, as the last one hanged, finishes it (but is unable to say Amen) as he is thrown from the scafold breaking his neck instantly and becoming a martyr for the side of hope and truth in a turmoulous climax.