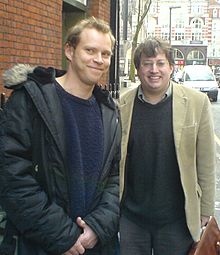 Mitchell and Webb have also appeared in the short-lived U.K. regional versions of the 'Get a Mac' advertisements for Apple. They also voiced a pair of peas on the Ant and Dec's Saturday Night Takeaway sponsorship adverts for Birds Eye.

Magicians, a film starring the pair was released on 18 May 2007.

In 2008, the duo wrote a pilot script for their first original sitcom; in Playing Shop, the two star as Eric and Jamie, friends who set up a business together after they are made redundant from their old jobs. Hartswood Films recorded the pilot episode on 20 December, with a view to producing a full series for BBC Two.[1] They have also released the book This Mitchell and Webb Book.