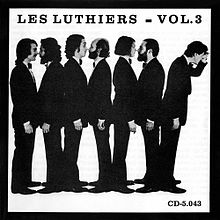 Les Luthiers is an Argentine comedy-musical group, very popular also in several other Spanish-speaking countries such as Paraguay, Peru, Chile, Ecuador, Spain, Colombia, Mexico, Uruguay, Bolivia, Cuba and Venezuela. They were formed in 1967 by Gerardo Masana, during the height of a period of very intense Choral Music activity in Argentina's state universities. Their outstanding characteristic is the home-made musical instruments (hence the name luthiers, French for "musical instrument maker"), some of them extremely sophisticated, which they skillfully employ in their recitals to produce music and texts full of high class and refined humor. From 1977 until his death in 2007, they worked together with Roberto Fontanarrosa, a renowned Argentine cartoonist and writer.

Les Luthiers began writing humorous pieces primarily in a Baroque style, especially imitating vocal genres such as cantatas, madrigals and serenatas. Later, they diversified into humorous renditions of music in other genres, from romantic lieder and opera to pop, mariachi and even rap. Their stage show is often intermingled with humorous skits, often involving absurd situations, the music and biography of fictional composer Johann Sebastian Mastropiero and a heavy reliance on fairly sophisticated word play. Much of the humor derives from the basic contradictions between the formality and highly developed vocal and instrumental technique of classical musicians and the sheer silliness of their show. Three members of the group also provided their voices for the pigeons in the Latin American and Spanish dubbings of the 2008 Disney film, Bolt.

Les Luthiers are known in particular for employing a diverse ensemble of invented instruments created from common, everyday materials. The group's first home-made musical instrument, the bass-pipe a vara (a sort of trombone), was created by Gerardo Masana, the founder of the group, by joining paperboard tubes found in the garbage and miscellaneous items. Forty years later, this instrument is still being used on stage.

The first informal instruments were relatively simple, like the Gum-Horn, made with a hose, a funnel and a trumpet's mouthpiece, and some of them were born as a parody of musical instruments, which is the case of the latín (referred to in English as fiddlecan) and the violata, bowed instruments whose resonating chambers are made out of a large tin for processed ham and a paint can respectively, the marimba de cocos, a marimba made out of coconuts, and others.

Inventor and instrument-maker Carlos Iraldi (1920–1995), as "Les Luthiers' luthier", was responsible for inventing several more sophisticated instruments, including the mandocleta, a bicycle whose rear wheel moves the strings of a mandolin, the bajo barríltono, a Double bass whose body is a giant barrel, and others.

After Iraldi's death in 1995 Hugo Domínguez took his place, and made instruments such as the desafinaducha, the nomeolbídet etc.