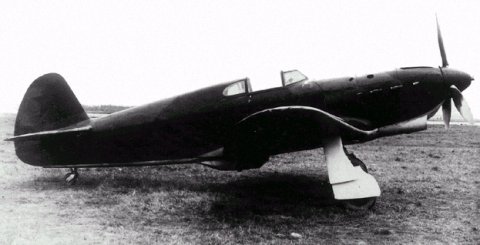 The Yak-1 was a Soviet and the first among the war's many successful fighters.

I-26-I first flew on 1940. The prototype suffered from oil overheating problems which were never completely resolved resulting in 15 emergency landings during early testing. Then, on , I-26-1 crashed, killing its test pilot . The investigation of the crash found that the pilot performed two consecutive barrel rolls at low altitude which was in violation of test flight plan. It was believed that during the first roll, the main landing gear became unlocked, causing it to crash through the wing during the second roll. It has been hypothesized that Piontkovskiy's deviation from the flight plan was caused by frustration that his aircraft was being used for engine testing while I-26-2, built with the lessons of I-26-1 in mind, was already performing .

Poor quality of subassemblies provided by different suppliers raised the I-26-2's weight 400 kg (880 lb) above projected figues, which restricted the airframe to only 4.4 G while overheating oil was still a problem. The many defects caused I-26-2 to fail government testing in 1940. Fortunately for Yakovlev, its competitors I-200 (future ) and I-301 (future ) also failed testing. Requested improvements were incorporated into I-26-3 which was delivered for testing on 1940. Although it passed on , the aircraft was still very much unfinished with unresolved engine problems.

Troublesome and slow testing and development must have been quite worrisome for Soviet officials considering the fact that the I-26 was ordered into production under the name Yak-1 on - a mere month after I-26-1 made its maiden flight! The goal of this gamble was to reduce lag time between prototype and production aircraft. [A similar approach was used by the when the was ordered into production without any prototypes built.] As a backup, the I-200 and I-301 were also ordered into production. Although the Yak-1 was slower than the I-200 and less heavily armed than the I-301, it enjoyed the advantage of having been started earlier which gave it a consistent lead in testing and development over its competitors. Beginning of the on 1941 made development and implementation of several other upcoming promising designs like unfeasible. The fact that was 's personal favorite likely also played in the Yak-1's favor.

Simultaneous manufacturing and testing of a design that required as many improvements as I-26 wreaked havoc on the production lines. Almost 8,000 changes were made to the aircraft's blueprints by 1941 with an additional 7,000 implemented the following year with 5,000 more changes coming in 1942. Production was further slowed by shortages of engines, s, s, wheels and cannons. Shortages of quality materials resulted in being torn off the wings on several aircraft. To make matters worse, Factory No.292 which was the main manufacturer of Yak-1s was bombed on 1943 and burned to the ground. Amazingly, production resumed among the ruins on . Due to loose tolerances, each aircraft was essentially unique with workers performing the final assembly having the unenviable task of mating what often proved to be very dissimilar components. For example, left and right main landing gear could be of different lengths and different angles relative to the aircraft which required adjusting their attachments to ensure an even stance for the completed aircraft. Parts were often non-interchangeable between aircraft. Production of Yak-1 ended in July 1944 with somewhere around 8,700 built.

At the onset of on , 425 Yak-1 were built, although many of these were en route or still disassembled. It was soon discovered that most air combat took place below 4,000 m (13,000 ft) which placed the new Soviet fighters, designed for high-altitude performance at a disadvantage. Still, the Yak-1 did prove to have a significant advantage over its Soviet competitors. A full circle turn took just 17 seconds in the Yak-1M. The MiG-3, which had the best high-altitude performance, did poorly at low and medium altitudes and its light armament made it unsuitable even for ground attack. The LaGG-3 experienced a significant degradation in performance (as much as 100 km/h (62 mph) on some aircraft) compared to its prototypes due to the manufacturer's inexperience with its special wooden construction which suffered from warping and rotting when exposed to the elements. The Yak-1's plywood covering also suffered from the weather but the steel frame kept the aircraft largely intact.

The aircraft's major problem early in deployment was fuel leaks caused by failure of spot-welded fuel tanks from vibration. Also troublesome was the fact that the canopy could not be opened at high speeds, potentially trapping the pilot in a falling aircraft. As the result, some pilots had the sliding portion of the canopy removed altogether. The notoriously unreliable and short-ranged radio equipment was also frequently removed to save weight. Like most early -equipped engines, M-105 could not tolerate negative G forces which starved it of fuel.

Nonetheless, the Yak-1 was well-liked by its pilots. Twenty-four of these aircraft were sent to the elite all-female whose pilots included the world's only female aces with 11 () and 12 () victories. Yak-1s were also the first aircraft of the ( _pl. 1 Pułk Lotnictwa Myśliwskiego "Warszawa") and French squadron.

The importance of this type in World War II is usually underestimated; the Yak-1's successors: the Yak-7, Yak-9 and Yak-3 were essentially the same aircraft design with modifications, it was simply the Soviet naming conventions which saw them labelled as different types; but judged by the same standards by which one names all Spitfires, Bf 109s or Fw 190s, they were the same type. Were this naming convention used, the Yak piston engined fighter would rank as the most produced fighter aircraft type in history, at over 36,000 in total exceeding by a few hundred its partner on the Eastern Front the Shturmovik.

*Yak-1 - Single-seat fighter aircraft. Intitial production version.
*Yak-1b - ("b" was an unofficial designation; after October 1942, all Yak-1s were built to this standard). New with lowered rear fuselage, increased armor, ShKAS machine guns replaced with a single 12.7 mm , electrical and pneumatic firing of the weapons instead of the mechanical system, new control stick based on the design, new gunsight, airtight fuselage, retractable tailwheel, improved engine cooling, PF engine with better low-altitude performance. The first flight (aircraft No.3560) took place in June 1942, with aircraft entering production in August. A total of 4,188 were built.
*Yak-1M - Yak-3 prototype with a smaller wing, revised cooling intakes, reduced overall weight and upgraded engine. Two were built.
*Several other Yak-1 variants did not receive special designations. These include prototypes with and engines, production aircraft capable of carrying external fuel tanks, production aircraft with the ability to carry 6x rockets or 2x 100 kg (220 lb) bombs, and lightened versions for air defense.
*I-28 (Yak-5) - High-altitude interceptor prototype with PD engine developed from I-26-2. Differed from I-26 in having an all-metal fuselage and tail and automatic, leading-edge slats on slightly smaller and reshaped wings. One aircraft was built, first flying on . It did not enter production due to many deficiencies of the engine but served as the basis for high-altitude versions of Yak-7 and Yak-9.
*I-30 (Yak-3) - Development of I-26 with an all-metal wing with leading-edge slats, weight and space savings were utilized for additional armament and greater fuel capacity. Two prototypes built - I-30-1 armed with 3x 20 mm cannons and 2x 7.62 mm machine guns, and I-30-2 with two additional ShKAS. It did not enter production. The name Yak-3 was re-used for a different fighter. See .