The Mi-4 was designed in response to the American H-19 Chickasaw and the deployment of U.S. helicopters during the Korean War. While the Mi-4 superficially resembles the H-19 Chickasaw, it is a larger helicopter and is able to lift more weight. The first model entered service in 1952, and replaced the Mi-1. The helicopter was first displayed to the outside world in 1952 at the Soviet Aviation Day in Tushino.

One Mi-4 was built with a jettisonable rotor. It served as an experimental vehicle for future pilot safety and ejection designs.[3]

The Mi-4 transport helicopter laid the beginning of the Soviet Army Aviation, it was widely used both in the armed forces and in the national economy and for several decades remained the main type of helicopter in the inventory of the Soviet Armed Forces and of the Civil Air Fleet. The Mi-4 went out of service with the development of the Mi-8. It is not used by the Russian Air Force anymore, though it remained in service in some countries as a utility helicopter or as a military transport a while longer. Albania was thought to be the final country using the helicopter and by 2005 all were out of service. The Mi-4 played a very important role in Bangladesh liberation war of 1971. The Mi-4 was the workhorse of the Indian Army at the time. A highly successful heli-borne operation using Mi-4s helped the Indian Army's 57 Mountain Division clear the Meghna River. The helilift of a battalion of Indian troops to the outskirts of Sylhet was the first heli-borne operation of the Indian army.

Much like the UH-1 Huey, after it was gradually phased out of military service, it was used in various domestic roles: search and rescue, firefighting, polar expeditioning, construction site cargo helicopter, commercial flights and many others.[4]

Afghanistan
18 acquired by the Royal Afghan Air Force from 1963, withdrawing the last from service in 1997.[5]

Cuba
One example, of the FAR (Fuerza Aérea Revolucionaria) is displayed at the Museo del Aire (Cuba)[6] 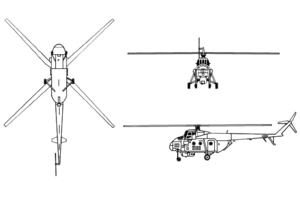 The initial version of this article was based on material from aviation.ru. It has been released under the GFDL by the copyright holder.