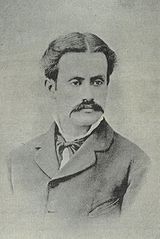 Cipriano Castro at the age of 25

Cipriano Castro was the son of José Carmen Castro and Pelagia Ruiz. He was born on 12 October 1858 in Capacho, Táchira. Castro's father was a mid-level farmer and he received the an education typical of the tachirense middle-class. His family had significant mercantile and family relations with Colombia, in particlular with Cúcuta and Puerto Santander. After studying in his native town and the city of San Cristóbal, he continued his studies at a seminary school in Pamplona, Colombia (1872–1873). He left those studies to return to San Cristóbal, where he began work as employee of a company called Van Dissel, Thies and Ci'a. He also worked as a cowboy in the Andean region.

Military experience and introduction to politics

In 1876 Castro opposed the candidacy of general Francisco Alvarado for the presidency of the Táchira state. In 1878 he was working as the manager of the newspaper El Álbum when he participated along with a group of independence advocates in the seizure of San Cristóbal when they refused submit to the authority of the new president of the state.

In 1884, he got into a disagreement with a parish priest, Juan Ramón Cárdenas in Capacho, which led to his imprisonment in San Cristóbal. After six months, he escaped and took refuge in Cúcuta, where he ran an inn.[1]. There he met his future wife, Rosa Zoila Martinez, who would become known as Doña Zoila. In June 1886, he returned to the Táchira as a soldier, accompanying generals Segundo Prato, Macabeo Maldonado and Carlos Rangel Garbiras to again raise the flag of autonomy, much to the dismay of the governor of the Táchira region, General Espíritu Santo Morales. Castro defeated government forces in Capacho Viejo and in Rubio. Promoted to general, himself, Castro began to stand out in the internal politics of Táchira state. It was during the burial of a fellow fighter, Evaristo Jaimes, who had been killed in the earlier fighting that Castro met Juan Vicente Gómez, his future companion in his rise to power. He entered politics and became the governor of his province of Táchira but was exiled to Colombia when the government in Caracas was overthrown in 1892. Castro lived in Colombia for seven years, amassing a fortune in illegal cattle trading and recruiting a private army.

Cipriano Castro (center) during his entrance to Caracas in 1899 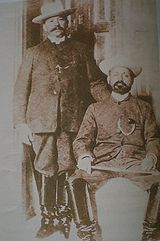 Amassing considerable support from disaffected Venezuelans, Castro's once personal army developed into a strong national army, and he used it to march on Caracas in October 1899 in an event called the Revolución Liberal Restauradora, and seize power, installing himself as the supreme military commander.

Once in charge, Castro inaugurated a period of plunder and political disorder having assumed the vacant presidency, after modifying the constitution (1904). He remained president for the period 1904-1911, designating Juan Vicente Gomez his "compadre" as vice-president.

Castro's rule was marked by frequent rebellions, the murder or exile of his opponents, his own extravagant living, and trouble with other nations. Castro was characterized as "a crazy brute" by United States secretary of state Elihu Root and as "probably the worst of Venezuela's many dictators" by historian Edwin Lieuwen. His nine years of despotic and dissolute rule are best known for having provoked numerous foreign interventions, including blockades and bombardments by British, German, and Italian naval units seeking to enforce the claims of their citizens against Castro's government.

Cipriano Castro and his cabinet in 1902

The Venezuela Crisis of 1902–1903 saw a naval blockade of several months imposed against Venezuela by Britain, Germany and Italy over Castro's refusal to pay foreign debts and damages suffered by European citizens in a recent Venezuelan civil war. Castro assumed that the United States' Monroe Doctrine would see the US prevent European military intervention, but at the time the US saw the Doctrine as concerning European seizure of territory, rather than intervention per se. With prior promises that no such seizure would occur, the US allowed the action to go ahead without objection. The blockade saw Venezuela's small navy quickly disabled, but Castro refused to give in, and instead agreed in principle to submit some of the claims to international arbitration, which he had previously rejected. Germany initially objected to this, particularly as it felt some claims should be accepted by Venezuela without arbitration.

When the US press reacted negatively to incidents including the sinking of two Venezuelan ships and the bombardment of the coast, the US pressured the parties to settle, and drew attention to its nearby naval fleet. With Castro failing to back down, US pressure and increasingly negative British and American press reaction to the affair, the blockading nations agreed to a compromise, but maintained the blockade during negotiations over the details. This led to the signing of an agreement on 13 February 1903 which saw the blockade lifted, and Venezuela commit 30% of its customs duties to settling claims. When an arbitral tribunal subsequently awarded preferential treatment to the blockading powers against the claims of other nations, the US feared this would encourage future European intervention. The episode contributed to the development of the Roosevelt Corollary to the United States' Monroe Doctrine, asserting a right of the United States to intervene to "stabilize" the economic affairs of small states in the Caribbean and Central America if they were unable to pay their international debts, in order to preclude European intervention to do so.

Five years later, however, Castro again incited foreign naval intervention, this time by the Dutch, who seized a port and destroyed part of Venezuela's tiny navy.

In 1908 Castro had been seriously ill for four years due to a kidney problem.[2] Castro left for Paris in late 1908 to seek medical treatment for Syphilis, leaving the government in the hands of his lieutenant Gómez, the man who was instrumental in his victory of 1899. However, Gómez seized power himself. Castro spent the rest of his life in exile, mostly in Puerto Rico, making several plots to return to power — none of which were successful. Castro died 4 December 1924, in San Juan, Puerto Rico.