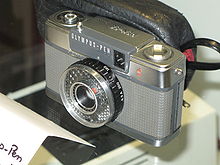 The Pen series is a family of half-frame cameras made by Olympus from 1959 to the beginning of the 1980s, and from 2009. Aside from the Pen F series of half-frame SLRs, they are fixed-lens viewfinder cameras.

In 2009, Olympus introduced the PEN E-P1[1], a Micro Four Thirds system digital camera which the company touts as the next-generation Pen camera.

The original Pen was introduced in 1959. It was designed by Yoshihisa Maitani, and was the first half-frame camera produced in Japan. It was one of the smallest cameras to use 35mm film in regular 135 cassettes. It was thought to be as portable as a pen; thus the name. The idea was to be much copied by other Japanese makers.

A series of derivatives followed, some easier to use with the introduction of exposure automation, e.g. the Pen EE; others with a wider aperture lens and a manual meter, such as the Pen D.

In 1966 the arrival of the Rollei 35, a camera almost as compact but making normal 24×36 exposures, would announce the beginning of the end for the half-frame concept. However, Olympus went on producing the simpler models of the Pen family until at least 1983.

In the descriptions below, please note that the focal lengths indicated do not give the same angle of view as for full-frame cameras: 30mm on the Pen is roughly equivalent to 45mm on a full-frame, and 28mm to a 40mm.

The Pen and Pen S

The original Pen is a very compact half-frame camera, with just a viewfinder, no meter and fully manual settings. It has a 28mm f/3.5 Zuiko lens. Its shutter settings are 25, 50, 100, 200, B; its aperture range from 3.5 to 22. The back is removed completely for film loading and unloading.

The Pen D2, launched in 1964, is the same model with an uncoupled CdS exposure meter replacing the selenium one.

The Pen EE was introduced in 1961 and was the amateur model, with fully automatic exposure and fixed focusing. It is a true point and shoot camera, and has a 28mm f/3.5 lens. The Pen EE family is easily recognized by the selenium meter window around the lens.

In 1966 the two cameras were slightly modified and became the Pen EE (EL) and Pen EE.S (EL) with a modification of the take-up spool to make film loading easier. EL stands for Easy Loading. You can only recognize them by a small label marked EL stuck on the front, or you can open them and look at the take-up spool.

The Pen EF, launched in 1981, was the last Pen model. It is like the Pen EE.2 or Pen EE.3, but with a small built-in flash, and was only sold in black finish with white letterings.

The Pen W or Pen Wide is a very rare variant of the Pen S model, with a wide-angle 25mm f/2.8 lens, equivalent to a 35mm in full format. It only exists in black finish, and has a cold flash shoe. It was only produced between 1964 and 1965, and today fetches high prices on the collectors' market.

The Pen EM, produced from 1965 to 1966, is a motorized Pen model. It has a 35mm f/2 lens, and a CdS exposure meter allowing automatic or manual exposure.

The Olympus PEN F series of cameras were half-frame SLR cameras produced between 1963 to 1970. The cameras were unique in using a rotary shutter.

The Pen Rapid EE.S and Pen Rapid EE.D were variants of the Pen EE.S and Pen EE.D designed to accept the Agfa Rapid cassette instead of the regular 35mm cassette. They were both made from 1965 to 1966, and met very little success.

In June 2009, Olympus announced the PEN E-P1, an interchangeable lens Micro Four Thirds system digital camera which carries on in the PEN tradition.[2] Its external design is clearly inspired by the traditional PEN series.

In January 2010, Olympus followed up the release of the E-P1 with the E-P2. For the most part, the E-P2 is identical to the E-P1 except it is available in all-black, and includes a high resolution electronic viewfinder. It also features two new art filters. The new port included for the electronic viewfinder can also be used for a microphone (not included). The suggested retail price at release was US$1099. The long awaited Olympus E-P3 was announced on June 30th, 2011, to positive reviews.

On February 3, 2010, Olympus Corporation announced a third camera, the Olympus PEN E-PL1, L standing for Lite. The camera was a success, with the E-PL2 following almost a year later, and an E-PL3 arriving in Fall 2011.

To compete with cameras such as the Panasonic GF3 and the Sony NEX-C3, Olympus introduced along side the E-P3 and the E-PL3, the E-PM1, M standing for Mini. The camera features a hotshoe port, and comes in multiple colours. Price has yet to be announced. The three new features of the E-P3 include a flash, 1080i HD video and touchscreen capability. [3] One of the main drawbacks of typical mirrorless interchangeable lens cameras is their use of contrast measurement autofocus which is fundamentally slower than phase-detect autofocus used in DSLRs. However, in the E-P3, focus speeds are said to have been improved greatly and an independent report states that manufacturer testing has shown that the EP-3 focuses faster than SLRs such as an unspecified Canon Digital Rebel and the Nikon D3100 [4]. However, it is difficult to verify this as it is unknown whether the tests were conducted under equal depth of field on both systems. Depth of field of a scene is solely responsible for the accuracy of focus and as the sensors used in the Four Thirds system are smaller than the APS-C sensors used in the said DSLRs, lenses with the same f-number and field of view produce shallower depth of field on the larger sensor cameras. Shallow depth of field is desired in photography as it gives more control over subject isolation but it also makes focusing harder. Additionally, focus speeds of lenses are heavily reliant on the motors within the lenses than on the camera bodies themselves. Therefore it is difficult to say that the focus speeds of the EP-3 are comparable to any DSLR body. Therefore the speeds can only be compared with specific lenses. Olympus will also be bundling the optional flash rather than making it an extra cost.

This article was originally based on "Olympus Pen" in Camerapedia, retrieved at an unknown date under the GNU Free Documentation License.