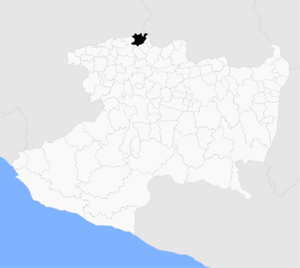 La Piedad de Cavadas is a city and its surrounding municipality (La Piedad municipality) located in the north-west of the Mexican state of , bordering and . The original colonial name was San Sebastián. It is bordered by the town of Santa Ana Pacueco, . Both towns straddle the . The city of La Piedad's population was 78,361 inhabitants in the 2005 census. The municipality has an area of 284.11 km² (109.7 sq mi) and its population was 91,132.

The municipality is connected through roads with cities in the Mexican states of Jalisco, Guanajuato, and of course Michoacán.

Places of interest include the town center with its beautiful "quiosco" (bandstand) built with quarried stone, the gateways, and the Señor de La Piedad church, which boasts perhaps the biggest dome in the country. Also of note are the Cavadas Bridge and the 30-metre-high El Salto waterfall.

There are also urban parks like Morelos Park, La Placa park, and the zoo. The city is famous because of its colorful "Rebozos", and the singer made it more famous with the song "El Perro Negro" ("The Black Dog").

There are hotels from 3 to 5 stars in the city.

La Piedad is a hub for agricultural products. The town was once known as the center of the Mexican pork industry, and still plays an important part in that industry. However, La Piedad has recently moved its economy towards textiles. Major manufacturers like Marval have production facilities in La Piedad. Surrounding towns are Santa Ana, Yurecuaro, Degollado, Numaran, and Ecuandureo. La Piedad is also the headquarters for veterinary pharmaceuticals company LaPisa and industrial manufacturer Turbomaquinas.Also there is an important candy factory and sausage factories like Parma. La Piedad is also well known for having the best taco restaurants in the country, restaurants such as Tacos Ayala, which was established in 1964, owned by businessman Mr. Juan Ayala Sr., with the headquarters located in the middle of downtown, and with more than 15 restaurants all over the city.

There are 569 companies registered in the municipality, which puts La Piedad in the top four cities in the state with the greatest number of companies, after , , and .

The Kansas City Southern railway crosses La Piedad allowing other companies to settle around in the future.

*TV channels - There are 2 local channels, Videa TV and TV La Piedad (there is also a cable service)
*Radio stations in FM and AM
*Newspapers - there are local and state newspapers.
*Internet

Many famous athletes and celebrities were born or lived in La Piedad, among these , midfielder for football team as well as his brother Carlos Morales, midfielder for . The frontman for Regional Mexican group "Los Razos de Sacramento y Reynaldo" Sacramento Ramirez is also from La Piedad.

Religion
* - Works in Vatican with the Pope
* - Bishop

In the city there are basketball and soccer (male and female) leagues, there are wrestling exhibitions, and the city has been finish of the Ruta Mexico (cycling). There are two public sport centers, clubs with tennis courts, a "Lienzo Charro," and the Juan N. Lopez stadium. Outside the city are the Alianza, Mercantil and Azteca clubs, where there are soccer fields and swimming pools.

La Piedad was also the hometown for , a soccer team in Mexico's league, which later moved to the first division. During their time in the first division, they captured the attention of Mexico's soccer fans with a number one finish in the league table. They were defeated by the Aguilas del America in "La Liguilla" (the playoffs). Los Reboceros merged with Queretaro, and became "Los Gallos Blancos" (The White Roosters) before their diminishment from national league soccer. Santiago Garcia is also a notable citizen from La Finca.

La Piedad suffers from big traffic issues, due to the location of this city. La Piedad is located close to the border of three states, Michoacan, Guanajuato and Jalisco. Thus the traffic problem arises. There are three highways entering this city; Mexico highways 110, 39, and 90.Highway 110 goes west and takes you to towns like Brisenas, La Barca, and the free route to Guadalajara. Highway 39 takes you south of La Piedad to Zamora, this highway takes you to the toll freeway 15, which goes north-south, from Nogales to Mexico City. Highway 90 takes you north of La Piedad to the state of Guanajuato.

The federal government has plans in progress to build a peripheral road in order to reduce the traffic.