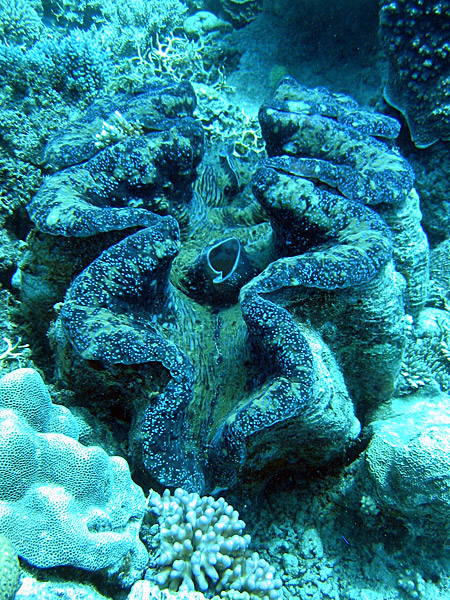 The giant clam, "Tridacna gigas", or traditionally, pa’ua, is the largest living . One of a number of large species native to the shallow of the South Pacific and s, they can weigh more than 200 kilograms (440 pounds), measure as much as 1.2 metres (4 feet) across, and have an average lifespan in the wild of 100 years or more. [cite web
url=http://www3.nationalgeographic.com/animals/invertebrates/giant-clam.html
title=Giant Clam: Tridacna gigas
Publisher=National Geographis Society
accessdate=2007-06-02] They are also found off the shores of the Philippines.Fact|date=August 2008

in adulthood, the creature's mantle tissues act as a habitat for the single-celled (e) from which it gets its nutrition. By day, the clam spreads out its mantle tissue so that the algae receive the they need to photosynthesize.

As is often the case with uncharacteristically large species, the giant clam has been historically misunderstood. Known in times past as the "killer clam" or "man-eating clam", reputable scientific and technical manuals once claimed that the great mollusc had caused deaths; versions of the "" even gave detailed instructions for releasing oneself from its grasp by severing the adductor muscles used to close its shell.

In a colorful account [ [http://www.pearlforpeace.org/cobb.html Accounts by Wilburn Dowell Cobb] ] of the discovery of the , Wilburn Cobb said he was told that a Dyak diver was drowned when the "Tridacna" closed its shell on his arm.

Today the giant clam is considered neither aggressive nor particularly dangerous. While it is certainly theoretically capable of holding one fast in its grip, in reality the shell's closing action is a defensive response, not an aggressive one, and the process of closing the shell valves is slow, far too slow to pose a serious threat. In other words, the clam is incapable of suddenly snapping shut on a person's arm or leg and thus drowning them.

The lists the giant clams as vulnerable. There is concern among s for the sustainability of practices among those who use the animal as a source of livelihood. The numbers in the wild have been greatly reduced by extensive overharvesting for food and the aquarium trade. On the , giant clam shells are sold as decorative accoutrements, and the meat, called "Himejako" in , is prized as a delicacy.

Recent developments in , specifically at in and in the , are allowing "T. gigas" to be tank raised for both use in home and release into the wild.

*, the largest bivalve in the fossil record