A Lighter Shade of Brown

A Lighter Shade of Brown 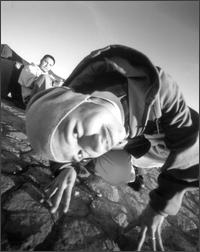 A Lighter Shade of Brown (LSOB) was a duo from best known for their 1991 hit single "On a Sunday Afternoon."

LSOB was formed in 1990 by One Dope Mexican (Robert Gutierrez) and Don't Try to Xerox (Bobby Ramirez).

The duo provided songs for Latino-market movies such as "" and "" following the release of their second LP, 1992's '"Hip Hop Locos," which failed to chart. The success of "Sunday Afternoon" nonetheless resulted in signing the group and releasing their third disc, "Layin' in the Cut," in 1994. The record did not sell as well as was hoped, peaking at #184 on the . LSOB went on a temporary hiatus,

1999 marked the last of their releases, including a greatest hits album and a non-charting single, "Sunny Day." That year, Gutierrez became a DJ at a San Bernardino radio station.