News Limited owns approximately 146 daily, Sunday, weekly, bi-weekly and tri-weekly newspapers, of which three are free commuter titles and 102 are suburban publications (including 16 of which News Limited has a 50% interest). News Limited publishes a nationally distributed newspaper in Australia, a metropolitan newspaper in each of the Australian cities of Sydney, Melbourne, Brisbane, Adelaide, Perth (Sundays only), Hobart and Darwin and a suburban newspaper in the suburbs of Sydney, Melbourne, Adelaide, Brisbane and Perth. The company publishes a further thirty magazine titles across Australia.[1]

With interests in digital media, the company's sites include carsguide.com.au, news.com.au, MOSHTIX.com.au, GetPrice.com.au and truelocal.com.au, and has a 50% stake in CareerOne.com.au, and a share in REA Limited that operates www.realestate.com.au, as well as websites for most newspaper and magazine titles. The company's other Australian assets include part-shares in subscription television provider FOXTEL and the National Rugby League together with shares in two teams in the NRL.

News Limited was established in 1923, publishing The News, a daily newspaper in Adelaide, South Australia. Sir Keith Murdoch acquired a minority interest in the company in 1949.[3] Following the death of his father, Sir Keith, in 1952, Rupert Murdoch inherited The News, which has been described by Bruce Page[4] as the "foundation stone" of News Limited (and News Corporation).

Over the next few years, Murdoch gradually established himself as one of the most dynamic media proprietors in Australia, quickly expanding his holdings by acquiring a string of daily and suburban newspapers in most capital cities, including the Sydney afternoon paper, The Daily Mirror, as well as a small Sydney-based recording company, Festival Records. His acquisition of the Mirror proved crucial to his success, allowing him to challenge the dominance of his two main rivals in the Sydney market, the Fairfax Newspapers group, which published the hugely profitable The Sydney Morning Herald, and the Consolidated Press group, owned by Sir Frank Packer, which published the city's leading tabloid paper, The Daily Telegraph.

In 1964, News Limited made its next important advance when it established The Australian, Australia's first national daily newspaper, based first in Canberra and later in Sydney. The Australian, a broadsheet, gave News Limited a new respectability as a quality newspaper publisher, and also greater political influence since The Australian has always had an elite readership, if not always a large circulation.[citation needed]

In 1972, News Limited acquired The Daily Telegraph from Sir Frank Packer, making Murdoch one of the "big three" newspaper proprietors in Australia, along with Fairfax Media in Sydney and his father's old Herald and Weekly Times Ltd in Melbourne. In the 1972 elections, Murdoch swung his newspapers' support behind Gough Whitlam and the left wing Australian Labor Party, but by 1975 he had turned against Labor, and since then has almost always supported the rightist Liberal Party.[citation needed]

Over the next ten years, as his press empire grew, Murdoch established a hugely lucrative financial base, and these profits were routinely used to subsidise further acquisitions. In his early years of newspaper ownership Murdoch was an aggressive, micromanaging entrepreneur.[citation needed] His standard tactic was to buy loss-making Australian newspapers and turn them around by introducing radical management and editorial changes and fighting no-holds-barred circulation wars with his competitors. By the 1970s, this power base was so strong that Murdoch was able to acquire leading newspapers and magazines in both London and New York, as well as many other media holdings.

On the 12 July 2006, News Limited announced the creation of a new division, News Digital Media to manage the operations of the news site NEWS.com.au; the online marketplace sites, carsguide.com.au, truelocal.com.au and careerone.com.au as well as the partly owned realestate.com.au, foxsports.com.au and related activities involving FOXTEL and the company’s newspapers and the Australian versions of Fox Interactive Media sites MySpace and IGN. Chairman and chief executive of News Limited, John Hartigan, announced the appointment of Richard Freudenstein as chief executive of the division.[5][dead link]

In the wake of the News International phone hacking scandal in the United Kingdom, in July 2011 News Limited announced a review of all payments in the previous three years.[6] On 22 July it was reported that two retired Victorian Supreme Court judges, Frank Vincent AO QC and Bernard Teague AO, were appointed to act as independent assessors of the conduct of the review and also assess the outcome.[7] The editorial and financial review concluded in early November and found no evidence of phone hacking or payments to public officials,[8][9] with Vincent and Teague declaring that the review process did not bring ".....to light any systemic issues with respect to the making of payments to third parties and any substantial amounts paid to individuals in respect of illegitimate activities."[10]

Murdoch's desire for dominant cross-media ownership manifested in early 1961 when he bought an ailing Australian record label, Festival Records, and within a few years it had become the leading local recording company. He also bought a television station in Wollongong, New South Wales, hoping to use it to break into the Sydney television market, but found himself frustrated by Australia's cross-media ownership laws, which prevented him from owning both a major newspaper and television station in the same city. Since then he has consistently lobbied, both personally and through his papers, to have these laws changed in his favour. This occurred in 2006 when the Liberal-National Coalition Government, having gained control of both houses of the Australian Parliament, introduced reforms to cross-media ownership and foreign media ownership laws. The laws came into effect in early 2007.[citation needed]

News Limited has nearly three-quarters of daily metropolitan newspaper circulation and so maintains great influence in Australia. Internal News Limited documents reveal a brazen offer during the 2001 Federal election campaign to promote the policies of a major party in its best-selling newspapers nation-wide for almost A$500,000.[11] Other documents include a marginal seats guide written by a senior business manager for internal use. It evidences a corporate strategy to target marginal seats at the 2004 election.[12] Some of the documents appeared on Media Watch[13] but received very little coverage.[14][dead link]

Murdoch moved to Britain and rapidly became a major force there after his acquisitions of the News of the World, and The Sun in 1969 and The Times and The Sunday Times in 1981, which he bought in 1981 from the Thomson family. Both takeovers further reinforced his growing reputation as a ruthless and cunning business operator. His takeover of The Times aroused great hostility among traditionalists, who feared he would take it "downmarket." This led directly to the founding of The Independent in 1986 as an alternative quality daily.

Murdoch made his first acquisition in the United States in 1973, when he purchased the San Antonio News. Soon afterwards he founded the National Star, a supermarket tabloid, and in 1976 he purchased the New York Post. Subsequent acquisitions were undertaken through News Corporation.

In 1991 News Limited spun off its longtime magazine house, Southdown Press, as Pacific Magazines and Printing, and sold the former Advertiser magazines, renamed Murdoch Magazines, to Matt Handbury. News Limited reentered the magazine market in 2000 with the start of News Magazines. In 2006, News Limited returned to being a major player in the Australian magazine business with the purchase of Independent Print Media Group's FPC Magazines (Delicious, Super Food Ideas, Vogue Australia).

As a part of News Corporation, News Limited operates the following: 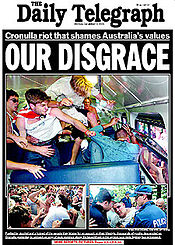 Front page of The Daily Telegraph on 12 December 2005, reporting on the 2005 Cronulla riots 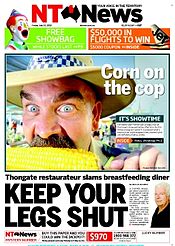