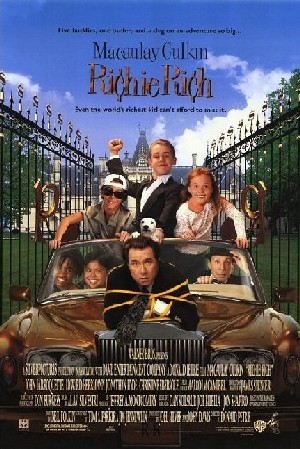 "Richie Rich" (sometimes stylized Ri¢hie Ri¢h) is a 1994 live-action of the character Richie Rich. Directed by , the film stars as the title character (this would be his final movie as a "child actor"). , , , , and serve in supporting roles, while and appear in cameo roles. Culkin's younger brother Rory Culkin played the part of little Richie.

While in theaters, the film was shown with a cartoon called .

Richie Rich is the world's wealthiest kid, a billionaire, getting $100,000 a week and has anything can buy, except friends (except his loyal butler Cadbury). But he thinks he might get his chance when he encounters a group of sandlot kids playing . By being himself, he manages to win their friendship and loyalty.Meanwhile, evil businessman Lawrence Van Dough is conspiring to dispose of Richie and his family in order to break into the fabled Rich family vault. Now, it's up to Richie, Cadbury, the loyal about the Rich staff and Richie's friends to stop Van Dough and save his parents.

Van Dough eventually brings the Rich family, at gunpoint, into the mountainous vault that holds all their valuables. Van Dough is surprised to find that the vault holds childhood keepsakes, nothing he could sell. Demanding an explanation, he finds the Rich family keeps their money in banks.

Richie shows up and with the aid of technological devices, gets the drop on the kidnappers. It doesn't go as well, as the Rich family is chased onto the side of the mountain, which is currently being carved into their likeness. Cadbury takes on Van Dough's associate, who is trying to use a rock blasting laser to destroy them. Van Dough is defeated with a punch, Cadbury's opponent requires many blows.

The house and grounds at which Richie Rich is filmed are those of the in . The in the back yard is the at .

While the movie was unsuccessful at the box office and maintains a 25% rating on RottenTomatoes.com it is still shown on occasion on T.V. Noted film critic gave the film 3 out of 4 stars saying he was surprised how much he enjoyed it and though it wasn't the greatest movie, he liked that it had style and didn't go for cheap payoffs.

* In one scene Van Dough is seen watching . Later in the movie, a scene of North by Northwest is spoofed in the scene dealing with Mount Richmore.