Balchik (Bulgarian: Балчик) is a Black Sea coastal town and seaside resort in the Southern Dobruja area of northeastern Bulgaria. It is located in Dobrich Oblast and is 42 km northeast of Varna. The town sprawls scenically along hilly terraces descending from the Dobruja plateau to the sea. 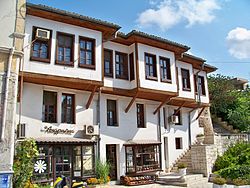 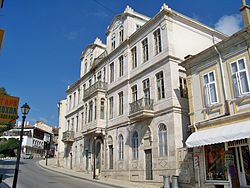 Founded as a Thracian settlement, it was later colonised by the Ionian ancient Greeks with the name Krounoi (renamed as Dionysopolis, after the discovery of a statue of Dionysus in the sea ).[4] Later became a Greek-Byzantine and Bulgarian fortress. Under the Ottoman Empire, the town came to be known with its present name, which perhaps derived from a Gagauz word meaning "small town".[5] Another opinion is that its actual name derived from Balik's name.

After the liberation of Bulgaria in 1878, Balchik developed as centre of a rich agricultural region, wheat-exporting port, and district (okoliya) town, and later, as a major tourist destination with the beachfront resort of Albena to its south. The ethnic composition gradually changed from mostly Gagauz and Tatar/Turkish to predominantly Bulgarian. According to an estimate by Bulgarian historian Rayna Gavrilova the Bulgarian population before 1878 was only around 10%.[6] Currently the municipality (the town plus 22 villages) is 69.2% Bulgarian, 16.2% Turkish minority and 12.3% Romani.[7] An Ottoman mosque remains to serve the Muslim minority.

After the Second Balkan War, in 1913, the town, styled Balcic, became part of the Kingdom of Romania. It was regained by Bulgaria during World War I (1916–1919), but Romania restored its authority when hostilities in the region ceased. In 1940, just before the outbreak of World War II in the region, Balchik was ceded by Romania to Bulgaria by the terms of the Craiova Treaty.

During Romania's administration, the Balchik Palace was the favourite summer residence of Queen Marie of Romania and her immediate family. The town is the site of Marie's Oriental villa, the place where her heart was kept, in accordance with her last wishes, until 1940 (when the Treaty of Craiova awarded the region back to Bulgaria). It was then moved to Bran Castle, in central Romania. Today, the Balchik Palace and the adjacent Balchik Botanical Garden are the town's most popular landmarks. Currently, three 18-hole golf courses are being developed around town, two designed by Gary Player and one by Ian Woosnam.

During the inter-war period, Balchik was also a favourite destination for Romanian avant-garde painters, lending his name to an informal school of post-impressionist painters - the Balchik School of Painting [8]- which is central in the development of Romanian 20th century painting. Many works of the artists composing the group depict the town's houses and the exotic Tatar inhabitants, as well as the sea.