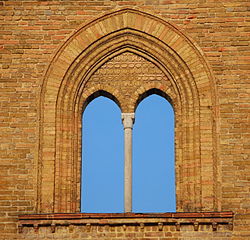 A mullioned window in the church of San Francesco of Lodi, Lombardy. 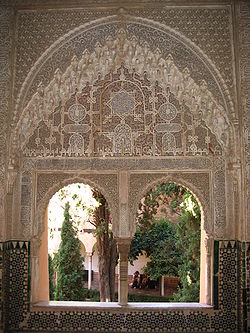 A Moorish mullioned window in the Alhambra of Granada.

A mullion is a vertical structural element which divides adjacent window units. The primary purpose of the mullion is as a structural support to an arch or lintel above the window opening. Its secondary purpose may be as a rigid support to the glazing of the window. When used to support glazing, they are teamed with horizontal supporting elements called "transoms".

In the commercial door industry, the term is also applied to a piece of hardware that divides the opening of a pair of doors.

Stone mullions were used in Armenian, Saxon and Islamic architecture prior to the 10th century. They became common across Europe in the Romanesque architecture, with paired windows divided by a mullion, set beneath a single arch becoming a fashionable architectural form. The same structural form was used for open arcades as well as windows, and is found in galleries and cloisters.

In Gothic architecture windows became larger and arrangements of multiple mullions and openings were used, both for structure and ornament. This is particularly the case in Gothic churches where stained glass is set in lead and ferramenta between the stone mullions. Mullioned windows of a simpler form continued to be used into the Renaissance and various Revival styles.

Mullions may be made of any material, but wood and aluminum are most common, although glass is also used between windows.[1] I.M. Pei, in his design of JFK Airport's Terminal 6 (National Airlines Sundrome) used all-glass mullions, unprecedented at the time.[2]

Mullions are vertical elements and are often confused with transoms, which lie horizontally. The word is also confused with the "muntin" (or "glazing bar" in the UK) which is the precise word for the very small strips of wood or metal that divide a sash into smaller glass "panes" or "lights".

A mullion acts as a structural member, and it carries the dead load of the weight above the opening and the wind load acting on the window unit back to the building structure. The term is also properly applied to very large and deep structural members in many curtain wall systems.

When a very large glazed area was desired before the middle of the nineteenth century, such as in the large windows seen in Gothic churches or Elizabethan palaces, the openings necessarily required division into a framework of mullions and transoms, often of stone. It was further necessary for each glazed panel, sash or casement to be further subdivided by muntins or lead cames because large panes of glass were reserved primarily for use as mirrors, being far too costly to use for glazing windows or doors.

In traditional designs today, mullions and transoms are normally used in combination with divided-light windows and doors when glazing porches or other large areas.