Caption = Section through showing path of . Periaqueductal gray is the gray area just peripheral to the cerebral aqueduct.) 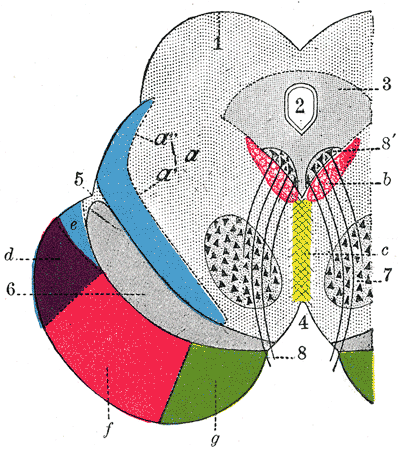 Periaqueductal gray (PAG; also called the "central gray") is the that is located around the within the . It plays a role in the descending modulation of and in defensive behaviour. The ascending pain and temperature fibers of the also send information to the PAG via the "spinomesencephalic tract". The spinomesencephalic tract is so-named because the fibers originate in the spine and terminate in the , another name for the midbrain, which is the part of the brain in which the PAG resides.

Stimulation of the periaqueductal gray matter of the midbrain activates releasing neurons that project to the raphe nuclei in the brainstem. 5-HT () released from the descends to the of the spinal cord where it forms excitatory connections with the "inhibitory interneurons" located in Laminae II (aka the substantia gelatinosa). When activated, these interneurons release either enkephalin or dynorphin (endogenous opioid neurotransmitters) which bind to mu opioid receptors* on the axons of incoming C and A-delta fibers carrying pain signals from nociceptors activated in the periphery. The activation of the mu-opioid receptor inhibits the release of substance P from these incoming first order neurons and in turn inhibits the activation of the second order neuron that is responsible for transmitting the pain signal up the spinothalamic tract to the ventroposteriolateral nucleus (VPL) of the thalamus. The nociceptive signal was inhibited before it was able to reach the cortical areas that interpret the signal as "pain" (such as the anterior cingulate). This is sometimes referred to as the and is supported by the fact that electrical stimulation of the PAG results in immediate and profound analgesia.

*Three known kinds of opioid receptors have been identified- mu, kappa, and delta. Synthetic opioid and opioid-derivative drugs activate these receptors (possibly by acting on the PAG directly, where a dense amount of these receptors are expressed) to produce analgesia- including heroin, morphine, vicodin, and similar pain modulating compounds.

Stimulation of the dorsal and lateral aspects of the PAG [in the rat] can provoke defensive responses characterised by freezing immobility, running, jumping, tachycardia and increases in blood pressure and . Conversely, stimulation of the caudal ventrolateral PAG can result in an immobile, relaxed posture known as , while its inhibition leads to increased locomotor activity.

Lesions of the caudal ventrolateral PAG can greatly reduce conditioned freezing, while lesions of the dorsal aspect can reduce innate defensive behavior, virtually "taming" the animal.

s of the PAG are excited by and by s. It also plays a role in copulatory behavior (see ) via a pathway from the ventromedial nucleus of the .