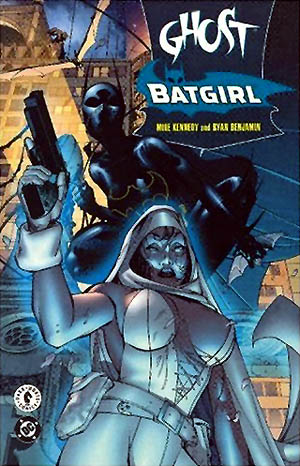 Ghost/Batgirl: The Resurrection Machine is a four-issue crossover mini-series staring Ghost of and Batgirl of . The trade paper back was released June 27, 2001.

Under the tutelage of Oracle, Batgirl investigates the bombing of the international Diamond Exchange which has resulted in severe casualties. openly claims responsibility for the disaster but reports show that nothing is stolen, nor were there any high profile enemies at the scene that Two-face would consider targeting. Oracle's investigation lead to the city of Arcadia, where Ghost is on the search for , a Civil War veteran kept alive by his own scientific experiments.

Councilman Fletcher, while at a social event, reveals that his daughter is among 6 persons reported missing after the bombing of the International Diamond Exchange. mentions that no body has been recovered, and this may indicate she is not dead. The disheartened Councilman responds "if Harvey Dent has her, she may wish she were."

Wayne instinctively assumes may be planning a mission to apprehend Dent, and specifically warns her not to. He claims that Two-Face is 's responsibility, and adds that if Batman needs help, he'll call.

Gordon, ignoring Wayne's order, plans a trip to investigate St. Mary's Hospital in . Meanwhile, Ghost is investigating the disappearance of a young woman named Debbie Scoggins. Both she and Batgirl end up meeting for the first time at an underground nightclub. Although they are unable to communicate verbally, the two quickly realize their agendas are compatible.

With the assistance of Oracle and Batgirl, Ghost comes face to face with Malcolm Greymatter, the mastermind behind the disappearances of numerous woman in Gotham and Arcadia. While Ghost believed Greymatter faked their deaths in order to sell them into servitude, he reveals their deaths were real and that he was responsible for reanimating their bodies through the use of his "resurrection machine."

Two-Face seeks revenge on Greymatter for reanimating the corpses of henchmen he has killed himself, claiming them as property. The conflict is cut short as Ghost and Batgirl wreak havoc on Greymatter's heart of operations. Facing defeat, he destroys the base of operations with a bomb, leaving no evidence of the reanimated bodies or the resurrection machine. Ghost and Batgirl are unable to capture the villain.

Although "The Resurrection Machine" appears to conform to the continuity of DC and Dark Horse Comics, it is most likely not considered canon.Fact|date=May 2008