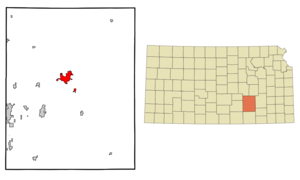 El Dorado is a situated along the in the central part of Butler County, located in south-central , in the Central . The population was 12,057 at the 2000 census, and it was estimated to be formatnum:LookupUSEstPop|2020075|EST in the year LookupUSEstPop|2020075|EYR. It is the and most populous city of Butler County. El Dorado is included in the Wichita .

The Spanish "" is a widely used place name. Its distinct local pronunciation is "el-dough-RAY-dough" IPAEng|ɛldəˈreɪdoʊ ().

El Dorado is home to the , which currently houses BTK killer .

A large , which is currently owned and operated by ,

El Dorado is home to , as well as one high school, one middle school, and 5 grade schools.

Butler Community College fields teams in both men's (mascot: Grizzlies) and women's (mascot: Lady Grizzlies) sports. Butler competes in the NJCAA's Jayhawk Conference, and its teams have won numerous league and national accolades. Butler's [http://grizzlies.butlercc.edu/football football team] has won five NJCAA national championships (1981, 1998, 1999, 2003, and 2007), and also played in the NJCAA championship game in 1998 and 2004. The 1985 squad also finished the season ranked #1 nationally. The program has produced numerous NFL players, most notably of the . Butler's [http://grizzlies.butlercc.edu/basketball/mens/index.cfm men's basketball program] also has a rich tradition, including a national championship in 1953, NJCAA national tournament runners-up in 1992 and 1993, a national tournament third-place finish in 1996, seven Jayhawk Conference championships since 1990, four NJCAA players of the year, ten NJCAA All-Americans, and three NBA draft picks. Notable former Grizzlies currently playing in the NBA include of the , of the , and of the . Butler's men's and women's [http://grizzlies.butlercc.edu/trackcc/index.cfm track and cross-country teams] also have won numerous conference, regional, and national accolades.

The [http://www.eldoradobroncos.org El Dorado Broncos] are a summer amateur baseball team comprised primarily of college players. The team competes within the Jayhawk League as part of the , or NBC. The Broncos have won the NBC World Series four times: in 1989, 1990, 1996 and 1998. Several former Broncos players currently play in Major League Baseball, including of the .