The Oahe Dam is a large dam along the Missouri River, just north of Pierre, South Dakota in the United States. It creates Lake Oahe, the fourth largest artificial reservoir in the United States, which stretches 231 miles (372 km) up the course of the Missouri to Bismarck, North Dakota. The dam's powerplant provides electricity for much of the north-central United States. It is named for the Oahe Indian Mission established among the Lakota Sioux in 1874. The project provides flood control, electric power, irrigation, and navigation benefits, estimated by the Corps of Engineers at $150,000,000 per year.

Upper Lake Oahe (Reservoir), between Cannon Ball, North Dakota, and Pollock, South Dakota, as seen from space, October 1985. South is at the top of the photo.

In September and October 1804, the Lewis and Clark Expedition passed through what is now Lake Oahe while exploring the Missouri River.

Oahe Dam was authorized by the Flood Control Act of 1944, and construction by the United States Army Corps of Engineers began in 1948. The earth main dam reached its full height in October, 1959. It was officially dedicated by President John F. Kennedy on August 17, 1962, the year in which it began generating power. The original project cost was $340,000,000. 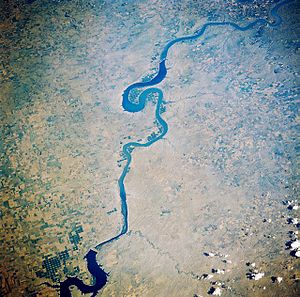 Tours of the powerplant are given daily Memorial Day through Labor Day.

Huff Archeological Site is a fortified Mandan village site on what is now the bank of Lake Oahe. It is designated a National Historic Landmark, but is endangered by erosion pressure from the lake. 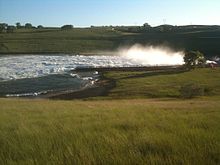