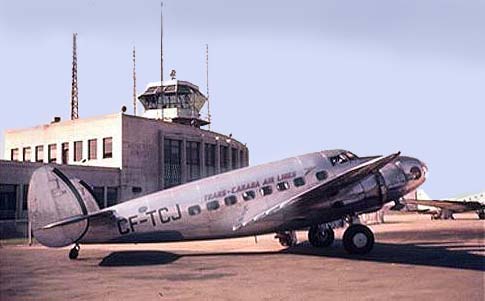 The design was a scaled-up version of the original Electra; the design team was lead by Don Palmer. The first Model 14 flew on July 29, 1937, piloted by . Lockheed built a total of 114 Model 14s; another 119 were built under license in by the Tachikawa Aircraft Company under the designation Tachikawa Type LO "Thelma".

The Model 14 entered commercial service with in October 1937. Aircraft were exported for use by of , BOAC of Britain, and (NAC) of . The Model 14 was the basis for development of the maritime and aircraft operated by the , USAAF, and many others during the .

In May 1938, a team of aviators of the Polish airline LOT, made up of Waclaw Makowski, director of the LOT and first pilot, Zbigniew Wysiekierski, second pilot, Szymon Piskorz, mechanic and radionavigator, Alfons Rzeczewski, radio-navigator and Jerzy Krassowski, assistant, accomplished an experimental flight from the United States to Poland. This flight was carried out on board one of the planes bought by LOT and manufactured by Lockheed in California, Lockheed L-14H Super Electra (of which the Polish registration was SP-LMK [http://www.edcoatescollection.com/ac5/ROW%20Europe/SP-LMK.html] ). The crew took off from Burbank (Los Angeles) where these planes were manufactured, towards Warsaw.

The distance covered was of 24,850 km. They flew over the states of Central America (Mazatlan, Mexico City, Guatemala, Panama), of South America (Lima, Santiago, Buenos Aires, Rio, Natal), the South Atlantic, Africa (Dakar, Casabianca, Tunis), Italy (Roma). The flight lasted 85 hours between May 13 and June 5. The overflight of the Atlantic - from Natal in Brazil to Dakar in Africa - lasted 11 hours and 10 minutes (3,070 km). This exploit of Polish aviators really marked the history of air communication on a world level. [http://www.cegesoma.be/pls/opac/opac.search?lan=N&seop=2&sele=51&sepa=1&doty=&sest=&chna=&senu=68503&rqdb=1&dbnu=1]

flew a Super Electra (NX18973) on a global flight. With four crewmates (Harry Connor, copilot and navigator; Tom Thurlow, navigator; Richard Stoddart, radio operator; and Ed Lund, flight engineer), the plane took off from in New York on July 10, 1938. The flight, which circled the narrower northern latitudes, passed through , , , , , and , before returning to New York on July 14. The total distance flown was 14,672 mi (23,612 km).