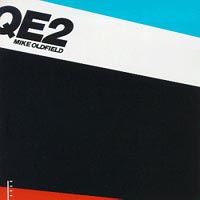 This was his sixth new album and featured original Oldfield compositions plus two short songs from bands ("Arrival") and The Shadows ("").

The album went to number one on the German album charts when it was released. In the album peaked at #23 and at #27 in the .

The Longest tracks on the album are "Taurus I" and the title track, "QE2". Both are typical Oldfield compositions, featuring various strong melodies using both modern and traditional instruments.

Some years later The Shadows responded to Oldfield's cover of "Wonderful Land", by releasing a cover of Oldfield's "". The Cover songs were released as singles; and the helicopter cover for "Arrival" was a parody of ABBA's "Arrival" album cover.

The album was the first Oldfield album to feature as a collaborator. Some tracks on the album feature vocals sung through .

The "Celt" lyrics were by and appear to be nonsense syllables chosen for their pleasing sounds rather than any actual meaning (many Oldfield works feature this).

"Molly" was made for his daughter, , who would later play keyboards on "The Songs of Distant Earth".

The album and its title track were named for the RMS "Queen Elizabeth 2". In fact, if one looks closely at the album, it appears to be a closeup of the side of the ship, complete with water level marks in the lower left corner. The first pressing even had a porthole cut out in the sleeve. The inside of the original foldout LP sleeve featured a schematic of one of the Queen Elizabeth 2's decks as well as a stylified picture of her engines. Sadly these have not been reprinted in later reissues.

On the original vinyl label of the album "QE2" is listed as two tracks, "QE2" by Oldfield/Hentschel and "QE2 Finale" by Oldfield, but gives them running time as a single piece.