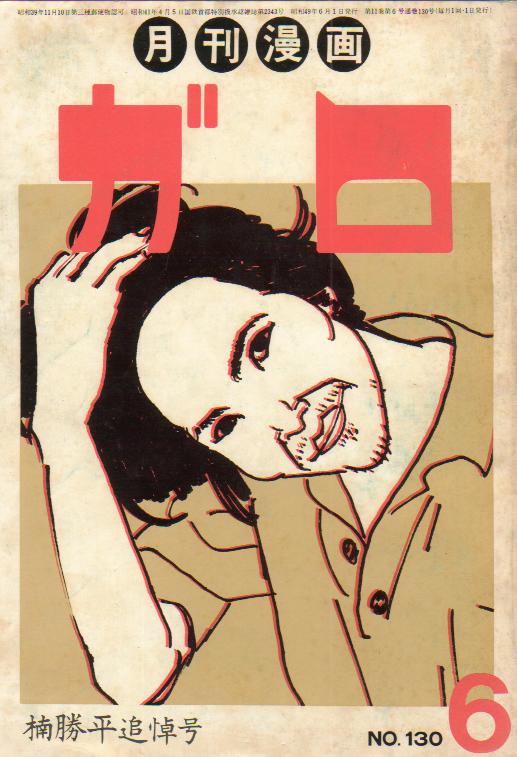 nihongo|Garo|ガロ| was a monthly manga anthology magazine in , founded in 1964 by . It specialized in alternative and .

Katsuichi Nagai founded "Garo" in July 1964 with the help of , naming it after one of Shirato's characters. The first series published in "Garo" was Shirato's ninja drama "Kamui", which with its themes of and ism was a hit with college students. Garo attracted several influential "" artists such as and , and discovered and promoted many new artists.

"Garo"'s circulation at the peak of its popularity in 1971 was over eighty thousand. However, during the 1970s and 1980s its popularity declined—at some points in the 80s, by 150 copies per year. By the mid-80s its circulation was barely over five thousand, and its demise was rumored to be imminent. Nagai managed to keep it going independently until 1991, when it was bought out by a game software company. Although a new, young president was installed and advertisements for computer games (based on stories featured in "Garo") started to run in the magazine, Nagai was kept on board as chairman until his death in 1996.

After being bought out, there were allegations of the anthology taking a more commercial path. Eventually authors who were regular to "Garo" went their own ways and founded other anthologies like "Ax". "Garo" is no longer being published.

For much of its existence, "Garo" was the premiere showcase for "art" manga in Japan. It was popular enough during its heyday to inspire several imitators, including COM, founded by manga legend , and .

Over the years, "Garo" went through many artistic phases, including Shirato's leftist dramas, and , erotic/grotesque, and punk. Unlike many of the popular anthology titles, the magazine never had a set theme to which the stories contained within it were required to conform; the only requirements were that they were interesting, and that their content was more important than their surface form.

Although it was never considered a "major" magazine, "Garo"'s influence both within the manga business and in Japanese society as a whole has been considerable. Many who got their start in "Garo" went on to do much higher-profile work elsewhere, and several films have been produced based on stories that originally ran in "Garo". Contemporary in Japan owes much to "Garo" artists, particularly , , and Shigeru Tamura. Retrospectives on the magazine have appeared in mainstream non-manga magazines, and in 1994 the Kawasaki city museum had a special exhibit of work by "Garo" alumni.

For the most part, most manga translation publishers have passed over the offbeat works showcased in "Garo" in favor of more mainstream, action/adventure and romance stories from the major publishers. Similarly, translators have mostly overlooked experimental fare. However, some "Garo" comics are available in English.

In the early 1990s, Viz Comics (now ) published some of Sanpei Shirato's "Kamui" under the title "". More recently, has published books of avant-garde manga, including many pieces from the pages of "Garo". Even more recently published Yoshiharu Tsuge's work "" in issue #250.

In 2008 Drawn & Quarterly published "Good-Bye", the third volume of their ongoing edition of the work of . Some of the comics collected in "Good-Bye" originally appeared in "Garo".