Dirty Pair
This article is about the original series. For the sequel series, see Dirty Pair Flash.

Dirty Pair (ダーティペア, Dāti Pea?) is a series of sci-fi comedy light novels written by Haruka Takachiho and illustrated by Yoshikazu Yasuhiko that was later adapted into anime and manga versions.

The stories take place in the years 2138-43, by which time humanity has spread across some few thousand star systems. A corporation called the World Welfare Works Association (also WWWA or 3WA) helps member systems of the United Galactica (UG) federation deal with various planetary-scale problems, for profit, by sending agents called "trouble consultants". Probably the most high-profile arm of the organization is the Criminal Investigations section, which works to solve crimes or mysteries. The series focuses on a team of trouble consultants in that section, named Kei and Yuri, who have a reputation for leaving a trail of destruction behind them, for which they are known publicly as the "Dirty Pair".

Kei and Yuri are the two voluptuous members of Trouble Consultant team 234, code named "Lovely Angels". Almost every mission they are involved with ends up in disaster, but not failure (they'll catch the crook, but a city may be destroyed in the process), and thus they are more generally known as the "Dirty Pair", a nickname they hate. They are always cleared of any wrongdoing by the 3WA's Central Computer because the extreme collateral damage is never actually their fault (though their mere presence has been known to make things worse). In some but not all continuities, they have joint ESP powers, usually limited to precognition. This talent was the reason they were recruited in the first place.(This is alluded to in the Adam Warren Collection "A Plague Of Angels")

The instigation of "the DP Concept" was a visit to Japan by the British Australian SF author A. Bertram Chandler, probably in 1978. On his itinerary was a stop at the young Studio Nue, which Takachiho co-founded. As something to entertain their guest, two of the staffers there, Yuri Tanaka and Keiko Otoguro, hit upon the idea with Takachiho of taking Chandler to a tournament of the All Japan Women's Pro-Wrestling organization, which was a member of the World Women's Wrestling Association (WWWA). The card included the highly-popular wrestling (and singing) team, the Beauty Pair. Something that passed among the foursome during that match led Chandler to remark to Takachiho something to the effect that "the two women in the ring may be the Beauty Pair, but those two with you ought to be called 'the Dirty Pair'."

This became the germ of an idea for a novella Takachiho decided to write, transplanting the rough-housing of pro-wrestling to the realm of space-opera mystery stories, with which he already had experience in his already successful Crusher Joe series. The team code-name "Lovely Angels" is also play on the names of certain women's teams of the time, such as the Queen Angels.

An anime TV series based on the novels, simply titled Dirty Pair, ran for 24 episodes that aired on Nippon Television affiliates from July to December 1985. However, two remaining episodes called With Love from the Lovely Angels were produced during 1986 and released as OVAs. The first was released on 1 January 1987. The second was released on 21 April 1988. The TV series has been licensed by Nozomi Entertainment. Nozomi Entertainment has also re-licensed all of the OVA's and the Project Eden film.

Yuri and Kei in Fatal But Not Serious

The American comic company and manga translator Studio Proteus acquired rights to create comic versions of The Dirty Pair in 1989; the first two graphic novels were published by the since-defunct Eclipse Comics. Later the rights were transferred to Dark Horse Comics. The first three series were written by Toren Smith and Adam Warren and drawn by Warren—after that Smith left the project and Warren took over writing completely. These stories have a much more cyberpunk style than the other versions; the later stories, starting with Fatal but not Serious, move into the transhuman subgenre. 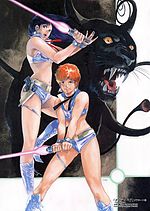 The light novels are written by Haruka Takachiho with illustrations by Yoshikazu Yasuhiko. The first four books were originally serialized in the Japanese publication SF Magajin. The light novels have begun to be released in English translation from DH Press (Dark Horse): the complete first book appeared in September 2007, and the second book appeared in March 2008. English translations previously existed only for the first story (published as one of a series of short books for Japanese students of English) and the fifth book, which was originally released in Japanese and English translation on the Microsoft Network during 1997–99.

A fifth version of the "DP Concept" made its debut on 1 October 2006 in a 26-week radio series on FM Osaka, entitled "Lovely Angel: Kei & Yuri". A streaming Internet broadcast of successive episodes became available beginning 15 October. The story involves a case in which the Lovely Angels assist the FBI on a case which takes them along the route of the old Route 66. The series features Horie Yui as Yuri and Minagawa Junko as Kei. While Takachiho participated in the selection of the voice artists, he was not involved in the writing for this series. (Additional information on the series, in Japanese, can be found at Nihon Sunrise's site.[1]

A second radio series, "Daatipea91: Kunoichi" began on FM Osaka on 15 October 2007. This time written by Takachiho himself, it places eighteen-year-old Kei and Yuri in Japan in the year 1791 as student ninjas who find themselves embroiled in political affairs of the period. Horie Yui and Minagawa Junko reprised their voice roles. Again, a streaming broadcast was available. This series was re-broadcast during March to April 2009.[2]