Crack Down
For a definition of the verb "crack down", see the Wiktionary entry crack down.
For the Xbox 360 game, see Crackdown.

Crack Down (クラックダウン?) is a run and gun arcade game originally released by Sega in 1989, and ported to the Sega Mega Drive/Genesis in 1990. It was also ported and released to a number of home computer platforms by U.S. Gold.

The Mega Drive version of Crack Down was re-released on the Wii Virtual Console in Japan on August 7, 2007 and in PAL regions on September 7, 2007. An Xbox Live Arcade version for the Xbox 360 was announced.[1] 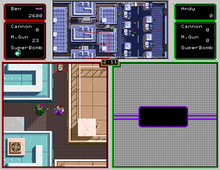 Using a top-down perspective (akin to Gauntlet), the player controls either Ben or Andy, a pair of agents charged with stopping mad scientist Mr. X from taking over the world, as they make their way through several timed levels, planting bombs and destroying cyborg enemies using guns (the "machine gun" and the "cannon" can be swapped back and forth) and smart bombs (which wipe out all enemies on screen.) The goal of each stage is to plant all of the bombs before their collective timer goes off.