NY1, New York One, is a 24-hour cable-news television channel focusing on the five boroughs of New York City. In addition to news and weather forecasts, the channel also features human-interest segments such as the "New Yorker of the Week" and the "Scholar Athlete of the Week", and specialty program such as Inside City Hall (which is renamed Road to City Hall during New York City mayoral elections.

NY1 is owned and operated by Time Warner Cable (TWC).

On the TWC-New York City service, NY1 appears on channel 1 in standard definition (with a 4:3 aspect ratio) and on channel 701 in high definition (with a 16:9 aspect ratio). The channel appears on channel 8 on Cablevision's New York City service (in mid December 2010 it was moved to Channel 8 with Channel 1 stricken from the Cablevision program guide) in letterboxed standard definition (using the HD feed). It is available to over two million cable-television customers within the five boroughs of New York City; nearby Bergen County, New Jersey; Mount Vernon in Westchester County, New York; as well as Time Warner Cable systems throughout New York State and on Bright House Networks systems in Orlando and Tampa, Florida starting September 9, 2011. [1] Verizon FiOS does not carry the station.[2]

NY1 was conceived in 1991 by Richard Aurelio, the president of Time Warner Cable's New York City cable group. The station launched September 8, 1992, from its newsroom in the National Video Center at 460 West 42nd Street in the Manhattan borough of New York City under the guidance of Paul Sagan, NY1's vice president of news, and Steve Paulus, NY1's news director. Construction of the 42nd Street facility was completed on July 15, but the channel's newly hired reporters actually began work a month earlier by attending a videojournalism "boot camp".[3] While some of the reporters had used their own cameras in other markets, most had had no exposure to the technical side of journalism. Following their training, the reporters and the rest of the staff took part in an additional two-month training period that included four weeks of real-time rehearsal. A watershed event came in the final weeks of training, with the collapse of a former post-office building on Manhattan's West Side. Although the channel was not yet on the air, NY1 reporters covered the story as if the channel was fully operational, interviewing survivors and witnesses and reporting the story more fully[citation needed] than competing television outlets.[4]

In January 2002, the station moved to a new, all-digital facility at the Chelsea Market, 75 Ninth Avenue (between West 15th-16th Streets) in the Chelsea neighborhood of Manhattan.

On June 30, 2003, NY1 Noticias, a Spanish-language version of the channel, began operating for digital-cable subscribers.

In late 2005, NY1 launched a video-on-demand service for its TWC customers. NY1 on Demand is on Channel 1110 in the TWC-New York City system.

In 2008, NY1 launched a high-definition channel on Channel 701, although it was aired only in a pillarbox format (i.e., 4:3 aspect ratio picture with side pillars of NY1 logo) until migrating to a full 16:9 aspect ratio in October 2009.[citation needed]

NY1 as prototype for other TWC markets

NY1 was the first TWC local-news channel, and TWC has since added twenty-four-hour local news networks in several other markets modeled after NY1, including:

Two other channels, News 24 Houston and News 9 San Antonio, both joint ventures between TWC and Belo, were closed within the first two years of operation. 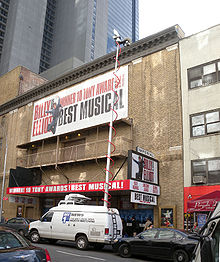 The most-common "program" on NY1 is a half-hour block beginning at the top and middle of every hour. The first minute contains top headlines followed by "Weather On The 1s", a brief one-minute weather summary. The remainder of the half-hour is filled with pre-recorded news segments heavily focusing on stories from the New York City metropolitan area. Nearly all stories are pre-recorded, even segments made to look like they are happening live; instead of a "live" indicator while reporters speak, most NY1 stories have a graphic saying merely that the reporter is (or, rather, was) "on scene". This is because when the report first aired, it may have been live but is usually not once re-aired, unless it updates breaking news. Moreover, reporters generally shoot their own stories with video-camera, and take them back to the newsroom to be edited into the broadcast rotation.[clarification needed]

Sports reports are featured throughout the day, while a one-hour call-in sports show, Sports on 1: The Last Word, is featured every night at 11:35 p.m.

In an effort to compete with local late-night newscasts, on January 22, 2007, NY1 introduced its own 11 p.m. newscast, News At 11.[clarification needed] The newscast is anchored Lewis Dodley and former CBS news correspondent Elizabeth Kaledin, an original member of the NY1 News team.

Inside City Hall offers more-extensive local political coverage than the area's broadcast stations.[citation needed] NY1 and its upstate sister channels have sponsored a number of political debates through this program.

Launched in July 2005, The Call is a live, half-hour call-in and write-in news show hosted by John Schiumo. Throughout the day, viewers are encouraged to vote on the top news stories of the day, and after receiving an e-mail alert as to the top story, asked to write or call in to discuss the topic with Schiumo.

Very often at the beginning of the show, Schiumo will have a short interaction with Danielle Rondinone, the program's senior producer, during which they will both offer their opinions of the days news.

On Stage is a half-hour program reporting on theater. Its focus is primarily on the New York City theater scene but the show also reports on performances in the wider region. It is hosted by Donna Karger, with Patrick Pacheco conducting interviews. NY1 anchor Roma Torre, who has a background in theater, is the critic for the show. Outside critics David Cote of Time Out New York and David Sheward of Back Stage also contribute reviews. Frank DiLella conducts on-scene reporting.

briefly show televisions in the background tuned to NY1.