Orders, decorations, and medals of Finland

Orders, decorations, and medals of Finland 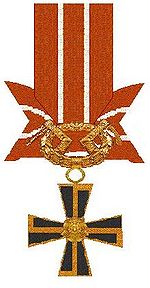 Order of the Cross of Liberty, 3rd class with swords

The orders, decorations and medals of Finland form a rather complicated system through which the Finnish government shows its respect to persons who have distinguished themselves on some walk of life. The legal basis of the system is the Act on the displays of public recognition (1215/1999) which grants the president the authority to issue decrees on orders, medals and titles.

The system is divided into three groups:

There are three Finnish orders:

The President of Finland is the grand master of all orders. Of the orders, the Order of the Cross of Liberty is the most distinguished and awarded the most seldom. Its decorations are awarded only for military or national defence merits. The other two crosses are awarded both for civilians and military persons. The decorations are awarded twice a year, on 4th June on the Flag Day of the Finnish Defence Forces, and on the Independence day, 6th December. In total, there are about 6.000 awards a year. 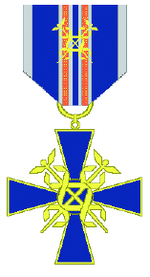 The individual areas of government have usually a separate awards system designed to show respect for those persons who do not qualify for an order. Such medals are founded by a presidential decree. Most typically, they include one or two classes: a cross and a medal. Thus far, the following medals have been founded [1]

In addition, there is a state decoration for 30 years of service of state. The corresponding decorations of the Central Chamber of Commerce and City of Helsinki the League of Finnish Municipalities are also approved for use with the official decorations.[2] Other decorations of private bodies may only be used privately.

The awarding body of the medals and crosses of merits varies. Although the decorations are founded by the president, the awarding body is usually the chief of the authority in question, i.e. a minister or a high-level civil servant.

Typically, the titles are awarded by the president. There are some exceptions, however. The chief judge of a district court may award the title of herastuomari (English: judge of the county) to a lay judge with a long service.[3] The Evangelical Lutheran Church of Finland and the Finnish Orthodox Church, on the other hand, have the right to award the titles of director cantus and director musices.[4][5] Yearly, the president awards over 200 titles on the advice of the titles' board. The awards take place twice a year: in March and in September.[6]

In addition to honorary titles awarded by the President, certain honorary titles are awarded ex officio to state civil servants in leading positions. For example, the managers or section chiefs of several state research institutes automatically hold the title of professori ("professor"), if they are qualified for tenured faculty position in a university.[7]

A stamp tax is paid for a title. The tax varies with the rank of the title and can be quite substantial for the higher titles. Customarily the organization that proposes the title pays the tax.