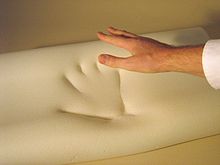 Memory foam is polyurethane with additional chemicals increasing its viscosity and density. It is often referred to as "visco-elastic" polyurethane foam, or low-resilience polyurethane foam (see LRPu). Higher-density memory foam softens in reaction to body heat, allowing it to mold to a warm body in a few minutes. A lower-density memory foam is pressure-sensitive and molds quickly to the shape of a body pressing against it, returning to its original shape once the pressure is removed. The speed with which a foam returns to its original shape after a weight is removed is often part of the marketing message among memory-foam mattress producers, many of whom tout "newer generation" foams with "faster recovery."[1]

Memory foam was developed in 1966 under a contract by NASA's Ames Research Center to improve the safety of aircraft cushions. Ames scientist Chiharu Kubokawa and Charles A. Yost of the Stencel Aero Engineering Corporation were major contributors to this project. The temperature-sensitive memory foam was initially referred to as “slow spring back foam”; Yost called it "temper foam".[2] Created by feeding gas into a polymer matrix, the foam has an open-cell solid structure that matches pressure against it, yet slowly springs back to its original shape.[3]

When NASA released memory foam to the public domain in the early 1980s, Fagerdala World Foams was one of the few companies willing to work with the foam, as the manufacturing process remained difficult and unreliable. Their 1991 product, the "Tempur-Pedic Swedish Mattress" eventually led to the mattress and cushion company, Tempur World.

Memory foam was subsequently used in medical settings. For example, it was commonly utilized in cases where the patient was required to lie immobile in their bed on a firm mattress for an unhealthy period of time. The pressure over some of their bony regions decreased or stopped the blood flow to the region causing pressure sores or gangrene. Memory foam mattresses remarkably decreased such events.[2]

Memory foam was initially too expensive for widespread use,[citation needed] but in recent years it has become cheaper. Its most common domestic uses are mattresses, pillows, and mattress toppers. It has medical uses, such as wheelchair seat cushions[3], hospital bed pillows and padding for persons suffering long-term pain or postural problems; for example, a memory foam cervical pillow may alleviate chronic neck pain. Its heat-retaining properties may help some pain sufferers who find the added warmth helps to decrease the pain.[citation needed]

The property of firmness (hard to soft) of memory foam is used in determining comfort. Firmness is measured by a foam's indentation force deflection (IFD) rating. However, it is not an accurate measure on "soft" and "firm". A higher-IFD foam, with a lower density can feel soft when compressed.

Some[who?] report that IFD is a poor way to measure softness of memory foam, and that foam density as a measure of quality is more important, but not always true. Foam density of 5 pounds per cubic foot (80 kg/m3) or greater is considered high quality, although most standard memory foam has a density of 1 to 5 lb/ft3 (16–80 kg/m3). Most bedding, such as topper pads and comfort layers in mattresses is 3 to 4.5 lb/ft3. Very high densities such as 5.3 lb/ft3 (85 kg/m3) are used infrequently in mattresses.

Memory foam has an open-cell structure that reacts to body heat and weight by 'moulding' to your body, helping relieve pressure points, preventing pressure sores, etc. Most memory foam has the same basic chemical composition, however the density and layer thickness of the foam means different mattresses feel very different. A high-density mattress will have better compression ratings over the life of the bedding. The lower density will suffer from slightly shorter life due to the compression that takes place after repeated use.

The amount of memory foam also has an effect on the capabilities of the mattress or topper. Anything less than 2 inches will not have much of an effect, whereas a 6-inch block would be too soft and dense to sleep on comfortably.

Each mattress, therefore, is a combination of its height, density, and type, each of which will have different properties.

When new, some memory foams give off a distinct chemical odor, which many people find unpleasant and some say is akin to the smell of paint. This odor decreases with airing, but some remain sensitive. Emissions from memory foam mattresses may cause more respiratory irritation than other mattresses; however mildew and house dust mites may not occur as frequently, so asthma attacks may be less frequent and severe. [5]

Memory foam, like other polyurethane products, can be combustible.[6] State and US Federal Laws have been enacted in the USA to require that all bedding, including memory foam items, be resistant to ignition from an open flame such as a candle or cigarette lighter. New bedding laws that went into effect in 2010 change the Cal-117 Bulletin for FR testing.[7] There is concern that high levels of the fire retardant PBDE, commonly used in memory foam, could cause health problems for users. [8] PBDEs are no longer used in most bedding foams, especially in the European Union.

Manufacturers caution about leaving babies and small children unattended on a memory foam mattress, as they may find it more difficult to turn and rotate and may suffocate.