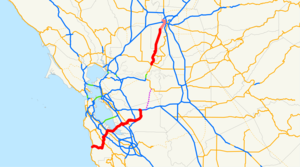 The other section is a north-west arterial road that begins at Route 12 in Rio Vista, passes through (where it connects to Route 220), and ends at the Interstate 80 interchange in West Sacramento. However, plans are underway to turn maintenance of SR 84 through West Sacramento to that city.

A ferry provides the crossing over Cache Slough from Rio Vista to Ryer Island. The ferry, a diesel-powered boat operated by , is in operation twenty-four hours per day and charges no toll.

Route 84 is legally defined to continue from I-580 to Route 4 in Antioch, but there are currently no plans in place to bridge the gap at this time. A plan to build a $600 million called the Mid-State Tollway along the proposed route was suspended in 2001 due to local opposition.