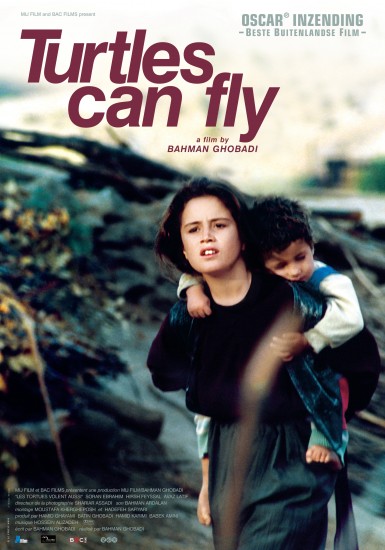 "Turtles Can Fly" is a 2004 written and directed by the Kurdish filmmaker from Iran , with notable theme music composed by . It was the first film to be made in since the fall of .

The film is set in a Kurdish refugee camp on the Iraqi-Turkish border on the eve of the US invasion of Iraq. Thirteen-year-old Satellite () is known for his installation of dishes and antennae for local villages who are looking for news of and for his limited knowledge of English. He is the dynamic, but manipulative leader of the children, organizing the dangerous but necessary sweeping and clearing of the minefields.

The industrious Satellite arranges trade-ins for unexploded mines. He falls for an orphan named Agrin (), a sad-faced girl traveling with her disabled, but smart brother Henkov, who appears to have the gift of . The siblings care for a toddler, whose connection to the pair is discovered as harsh truths are revealed.

Critiques of the film

The film however, has been critiqued by many, including well known left wing intellectuals like , who says that despite a beautiful story line, the film is one sided and seems to support the American invasion of Iraq. Significantly, the film is silent about what happens to 'Satellite' after the Americans finally land in their refuge camp. Other critics consider that the film reflects the true sentiment of the Iraqi people who despised the brutal dictatorship of Saddam Hussein, in particular the Kurds who were so mercilessly exterminated by Saddam's regime, and felt liberated by the American forces, as were the Europeans half a century ago.