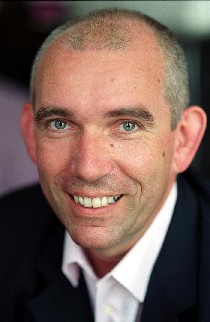 Joost Lagendijk (born in , ) is a Dutch politician and . He is a member of , which is part of the , and sits on the 's Committee on Foreign Affairs. He is chair of the Joint Parliamentary Committee with Turkey.

Professionally he worked for the publisher SUA between 1987 and 1988. In 1988 he became chairman and publisher of the "Tijdschrift Maatschappelijk Welzijn" (Magazine for Social Work). In 1994 he became publisher for Babylon-De Geus.

In 1997 he became GreenLeft's campaign coordinator for the 1998 general elections.

In 1999 he headed the GreenLeft's electoral list for the European elections. He, and with him three other Dutch Greens, were elected into parliament. After the elections, he became chair of the delegation to the EU&ndash; Joint Parliamentary Committee, which he still is, and thereby a member of the conference of Delegation leaders. He became also member for the delegation for relations with the Southeast European countries, which he left following the 2004 elections.

In a controversial leadership election in 2004, fellow MEP was elected to head the GreenLeft list in the European Elections instead of Lagendijk. After the 2004 elections he became a member of the , substitute for the and member of the delegation for relations with the Gulf States, including . He is chair of the Joint Parliamentary Committee with Turkey.

As MEP Lagendijk has shown particular interest for the -region and , and especially in keeping the peace in this unstable region. His pacifist background is clearly influential there. In December 2005, he visited Turkey to attend the trial against and speak at an event for the . In his speech he criticized the for using the violence by the as justification for violence against the Kurdish population. He was then charged with public denigration of the Turkish army. Lagendijk expected pressure by the media in Turkey to force prosecutors to drop charges. [cite news|url=http://jungle-world.com/artikel/2006/02/16690.html
author=Verbij, Antoine
title=Die heilige Kuh des Türkentums
work=Jungle World
date=2006-01-12
accessdate=2008-07-29
language=German] Indeed, the prosecutor declined to prosecute, referring to the and the , and the case was dropped.

On the Turkish newspaper reported that Joost Lagendijk was planning to marry , an award-winning journalist and reporter for the Turkish channel NTV. [cite news|url=http://www.hurriyet.com.tr/gundem/4299950.asp?m=1&gid=69
title=Sürpriz aşk
work=Hürriyet
first=Zeynep
last=Lule
date=2006-04-23
accessdate=2008-07-29
language=Turkish] The two were married on by the mayor of , , in the famous hotel. [cite news|url=http://www.todayszaman.com/tz-web/detaylar.do?load=detay&link=37752
title=Lagendijk Marries Turkish Journalist
first=Cagri
last=Cobanoglu
work=Zaman
date=2006-10-29
accessdate=2008-07-29] The event was reported in Turkey as big news and took place with an overwhelming presence of TV crews and other media.