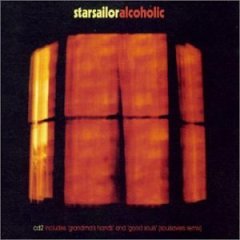 Artist = Starsailor
from Album =
Released =
Format = 2 CDs, 7", cassette
Recorded =
Length =
Label =
Writer =
Producer =
Last single = ""
(2001)
This single = "Alcoholic"
(2001)
Next single = "Lullaby"
(2001)
"Alcoholic" is the third single from the album "" by British pop band Starsailor, released in 2001. It is one of their most popular songs so far, and also their first single to be in the UK top ten. In their Love is Here DVD Walsh comments that Alcoholic is so well known because of the topic of the song.

The video for Alcoholic starts outside of a house in the night with an image of James in front of a car that has its lights on. The shot then change showing the band playing in a garage with an introspective air in the scene . Later the video shows some scenes inside the house where everything is not in order and it's raining and thundering while the camera moves around simulating the state of an alcoholized person. After all, it's seen from a window on the last bedroom Walsh singing the last sentences of the song dramatically while the rain falls.