A cross-dresser's enhanced cleavage with a deep V neckline

Cleavage enhancement encompasses a range of techniques used temporarily to improve the appearance of a person's breast cleavage or to create the illusion of breast cleavage on a person who has no such cleavage. This ranges from brassieres (bras) that lightly push the breasts together without any padding through a range of increasingly padded bras to techniques where chest skin is pulled towards the centre to generate cleavage and completely artificial breasts, such as breast prostheses are added to cover the materials used to pull the skin.

Women often want to enhance their cleavage for special occasions or to suit the style of a low cut top or dress. Examples include nightclub wear and formal dresses.

In movies and theatre, an actress who has smaller breasts than the character that they are playing may need to use cleavage enhancement techniques to present the image required by the role. For example, Julia Roberts was required to wear a water-padded bra for the movie Erin Brockovich in order to increase her apparent breast size and enhance her cleavage.[1]

Male cross-dressers often want to create the illusion of female cleavage as part of making their body appear feminine. Many crossdressers believe that displaying a convincing cleavage will distract attention from flaws in their appearance and will improve their ability to pass.[2] Because most such males have little or no breast tissue, some form of skin pulling technique is used, often in conjunction with the use of makeup to increase the illusion. 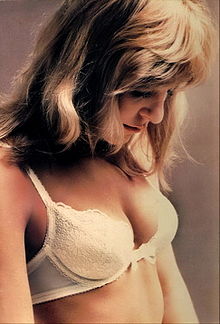 Cleavage enhancing bras are most commonly referred to as push-up bras. They vary in design from unpadded designs which simply push the breasts towards each other through to moulded cup designs with large moulded pads in the bottom and outside of the cups to force the breasts upwards and inwards.

Some cleavage enhancing bra designs incorporate removable pads to allow the extent of the push-up effect to be altered by the insertion or removal of pads.

Padding used in bras has been manufactured in a variety of styles, including sealed bags containing air, water or some form of liquid or gel, and from semi-rigid materials such as moulded polyurethane foam rubber.

Falsies are small pads similar to the removable pads sold with some push-up bras. Falsies made from silicone gel are also sometimes referred to colloquially as chicken fillets.[3]

Various methods are used to pull loose skin from the front of each breast towards the centre to create two vertical bulges of skin, then imitation breasts such as mastectomy breast forms are worn outside those skin bulges such that only the inside edges of those bulges are visible past the bra, top or dress.

Taping involves the use of some form of adhesive tape applied to towards the bottom of the breasts to pull them together.[4][5] Types of tape used include surgical micropore tape and athletic tape. Some also use a strip of moleskin across under the breasts with tape at the ends to hold it in place.

Use of the wrong techniques or tape with too strong an adhesive can cause injuries such as rashes, blisters, and skin being torn off.[4][6]

Semi-rigid pieces of material such as plastic can be applied to the skin using surgical tape, surgical adhesive or specialist adhesives normally used to glue mastectomy breast forms to the body.[4] Even a general purpose craft glue can be used for this purpose.[7]

Under-bras are commercially manufactured garments designed to pull the skin towards the centre. These garments look somewhat like a conventional bra, having a band and shoulder straps like a bra. As with other designs, breast forms and a bra are worn over the garment to complete the illusion of breasts. One disadvantage of these designs is that, with a bra over the top, there are two pairs of bra straps and two underbust bands that can potentially look like the person is wearing two bras. The design of these garments limits clothing styles to those that will adequately cover the straps, preventing, for example, the use of halterneck garments.

One such design is called a Diva. It has conventional bra style hook-and-eye fasteners at the front instead of the back and has cups that curve inwards, are fairly rigid and covered on the inside with a material that grips the skin to hold it in place using pressure rather than adhesive.[8]

Another similar device is called the Busty Cleavage Creator. It uses a pair of crossed velcro straps on the front to pull the skin towards the centre, leaving an uneven surface for the breast forms to sit against.[9] 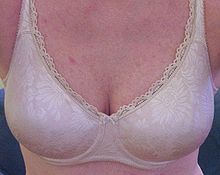 skin pulled in, with bra and mastectomy breast forms 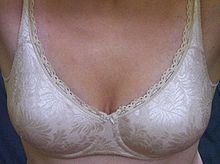 skin pulled in, with bra and mastectomy breast forms plus makeup

Adhesive gel bras consist of two shaped silicon gel filled bra cups that stick to the skin of the breast using built-in re-usable adhesive, then clip together to pull the breasts together.[10]

These can be used as falsies that won't slide around in a bra, and can be used to enhance cleavage on a woman by using them in their originally designed manner.

For cleavage enhancement purposes, these gel cups can be applied towards the bottom and outside of the breasts and then the clip done up to pull the skin together. They have advantages over techniques of pulling the skin forward, as there are no straps and they are widely and cheaply available. Some users deliberately wear the cups upside down by swapping the cups left-to-right.

Making cleavage appear deeper and the breasts look fuller alongside the cleavage using makeup is achieved using shading effects. The middle of the cleavage is made to look deeper by using a darker makeup colour than the base colour of the skin, while the most prominent areas of the breasts (either side of the cleavage) are made to look larger or more protruding by the use of a paler colour.[4][11] Sometimes, the darker shade is extended in a Y shape to add further emphasis to the roundness of the top of the breasts.

Cleavage enhancement techniques do not always give the desired results.

Using a skin pulling technique and pulling the skin too tightly or wearing a bra that is too small in the cup size will create excessive bulges either side of the cleavage,[12] which will look obviously pushed out of shape.

Either pulling the skin too little or showing too much of the peaks of the bulges created by a skin pulling technique may cause the curvature of the cleavage to be visibly different from the curve that would exist for real breasts of the same size. The parts of the breasts visible in the cleavage will appear to curve away in a manner that does not line up with the rest of the breasts.

Excessive or poorly applied makeup may look obviously false and may detract from an otherwise effective cleavage illusion.