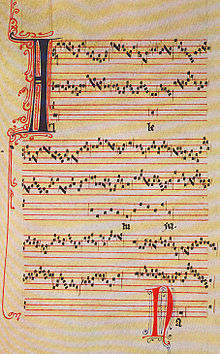 In medieval music, the rhythmic modes were set patterns of long and short durations (or rhythms). The value of each note is not determined by the form of the written note (as is the case with more recent European musical notation), but rather by its position within a group of notes written as a single figure called a "ligature", and by the position of the ligature relative to other ligatures. Modal notation was developed by the composers of the Notre Dame School from 1170 to 1250, replacing the even and unmeasured rhythm of early polyphony and plainchant with patterns based on the metric feet of classical poetry, and was the first step towards the development of modern mensural notation (Hoppin 1978, 221). The rhythmic modes of Notre Dame Polyphony were the first coherent system of rhythmic notation developed in Western music since antiquity.

Though the use of the rhythmic modes is the most characteristic feature of the music of the late Notre Dame school, especially the compositions of Pérotin, they are also predominant in much of the rest of the music of the ars antiqua through about the middle of the 13th century. Composition types which were permeated by the modal rhythm include Notre Dame organum (most famously, the organum triplum and organum quadruplum of Pérotin), conductus, and discant clausulae. Later in the century, the motets by Petrus de Cruce and the many anonymous composers, which were descended from discant clausulae, also used modal rhythm, often with much greater complexity than was found earlier in the century: for example each voice sometimes sang in a different mode, as well as a different language.[citation needed]

In most sources there were six rhythmic modes, as first explained in the anonymous treatise of about 1260, De mensurabili musica (formerly attributed to Johannes de Garlandia, who is now believed merely to have edited it in the late 13th century for Hieronymus de Moravia, who incorporated it into his own compilation) (Baltzer 2001). Each mode consisted of a short pattern of long and short note values ("longa" and "brevis") corresponding to a metrical foot, as follows (Reese 1940, 207–209):

Although this system of six modes was recognized by medieval theorists, in practice only the first three and fifth patterns were commonly used, with the first mode being by far the most frequent (Apel 1961, 223). The fourth mode is rarely encountered, an exception being the second clausula of Lux magna in MS Wolfenbüttel 677, fol. 44 (Hughes 1956a, 320). The fifth mode normally occurs in groups of three and is used only in the lowest voice (or tenor), whereas the sixth mode is most often found in an upper part (Hughes 1954a, 320).

Modern transcriptions of the six modes usually are as follows: 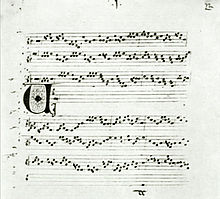 Devised in the last half of the 12th century (Seay 1975, 97), the notation of rhythmic modes used stereotyped combinations of ligatures (joined noteheads) to indicate the patterns of long notes (longs) and short notes (breves), enabling a performer to recognize which of the six rhythmic modes was intended for a given passage. Linked notes in groups of 3, 2, 2, 2, etc. indicate the first mode, 2, 2, 2, 2, … 3 the second mode, 1, 3, 3, 3, 3, etc. the third mode, 3, 3, 3, … 1 the fourth mode, 3, 3, 3, 3, etc. the fifth mode, and 4, 3, 3, 3, etc. the sixth mode (Hughes 1954a, 323–24). The reading and performance of the music notated using the rhythmic modes was thus based on context. After recognizing which of the six modes applied to a passage of neumes, a singer would generally continue on in that same mode until the end of a phrase, or a cadence. In modern editions of medieval music, ligatures are represented by horizontal brackets over the notes contained within it.

All the modes adhere to a ternary principle of metre, meaning that each mode would have a number of beat subdivisions divisible by the number 3. Some medieval writers explained this as veneration for the perfection of the Holy Trinity, but it appears that this was an explanation made after the event, rather than a cause (Reese 1940, 274; Hughes 1954a, 319–20). Less speculatively, the flexibility of rhythm possible within the system allows for variety and avoids monotony. Notes could be broken down into shorter units (called fractio modi by Anonymous IV) or two rhythmic units of the same mode could be combined into one (extensio modi) (Seay 1975, 98–99). An alternative term used by Garlandia for both types of alteration was "reduction" (Roesner 2001). These alterations may be accomplished in several ways: extensio modi by the insertion of single (unligated) long notes or a smaller-than-usual ligature; fractio modi by the insertion of a larger-than-usual ligature, or by special signs. These were of two types, the plica and the climacus (Hiley and Payne 2001).

The plica was adopted from the liquescent neumes (cephalicus) of chant notation, and receives its name (Latin for "fold") from its form which, when written as a separate note, had the shape of a U or an inverted U. In modal notation, however, the plica usually occurs as a vertical stroke added to the end of a ligature, making it a ligatura plicata. The plica usually indicates an added breve on a weak beat (Hiley and Payne 2001). The pitch indicated by the plica depends on the pitches of the note it is attached to and the note following it. If both notes are the same, then the plica tone is the upper or lower neighbor, depending on the direction of the stem. If the interval between the main notes is a third, then the plica tone fills it in as a passing tone. If the two main notes are a second apart, or at an interval of a fourth or larger, musical context must decide the pitch of the plica tone (Apel 1961, 227).

The climacus is a rapid descending scale figure, written as a single note or a ligature followed by a series of two or more descending lozenges. Anonymous IV called these currentes (Latin "running"), probably in reference to the similar figures found in pre-modal Aquitanian and Parisian polyphony. Franco of Cologne called them coniunctura (Latin for "joined [note]"). When consisting of just three notes (coniunctura ternaria) it is rhythmically identical with the ordinary three-note ligature, but when containing more notes this figure may be rhythmically ambiguous and therefore difficult to interpret (Hiley and Payne 2001). The difficulty was compounded in the later half of the 13th century, when the lozenge shape came also to be used for the semibreve. A general rule is that the last note is a longa, the second-last note is a breve, and all the preceding notes taken together occupy the space of a longa. However, the exact internal rhythm of these first notes of the group requires some interpretation according to context (Apel 1961, 240).

It was also possible to change from one mode to another without a break, which was called "admixture" by Anonymous IV, writing around 1280 (Roesner 2001).

Because a ligature cannot be used for more than one syllable of text, the notational patterns can only occur in melismatic passages. Where syllables change frequently or where pitches are to be repeated, ligatures must be broken up into smaller ligatures or even single notes in so-called "syllabic notation", often creating difficulty for the singers, as was reported by Anonymous IV (Apel 1961, 225; Roesner 2001).

An ordo (plural ordines) is a phrase constructed from one or more statements of one modal pattern and ending in a rest. Ordines were described according to the number of repetitions and the position of the concluding rest. "Perfect" ordines ended with the first note of the pattern followed by a rest substituting for the second half of the pattern, and "imperfect" ordines ended in the last note of the pattern followed by a rest equal to the first part. Imperfect ordines are mostly theoretical and rare in practice, where perfect ordines predominate (Hoppin 1978, 223).

Other writers who covered the topic of rhythmic modes include Anonymous IV, who mentions the names of the composers Léonin and Pérotin as well as some of their major works, and Franco of Cologne, writing around 1260, who recognized the limitations of the system and whose name became attached to the idea of representing the duration of a note by particular notational shapes, though in fact the idea had been known and used for some time before Franco (Hughes 1954b, 379–80). Lambertus described nine modes, and Anonymus IV said that, in England, a whole series of irregular modes was in use (Reece 1940, 288).