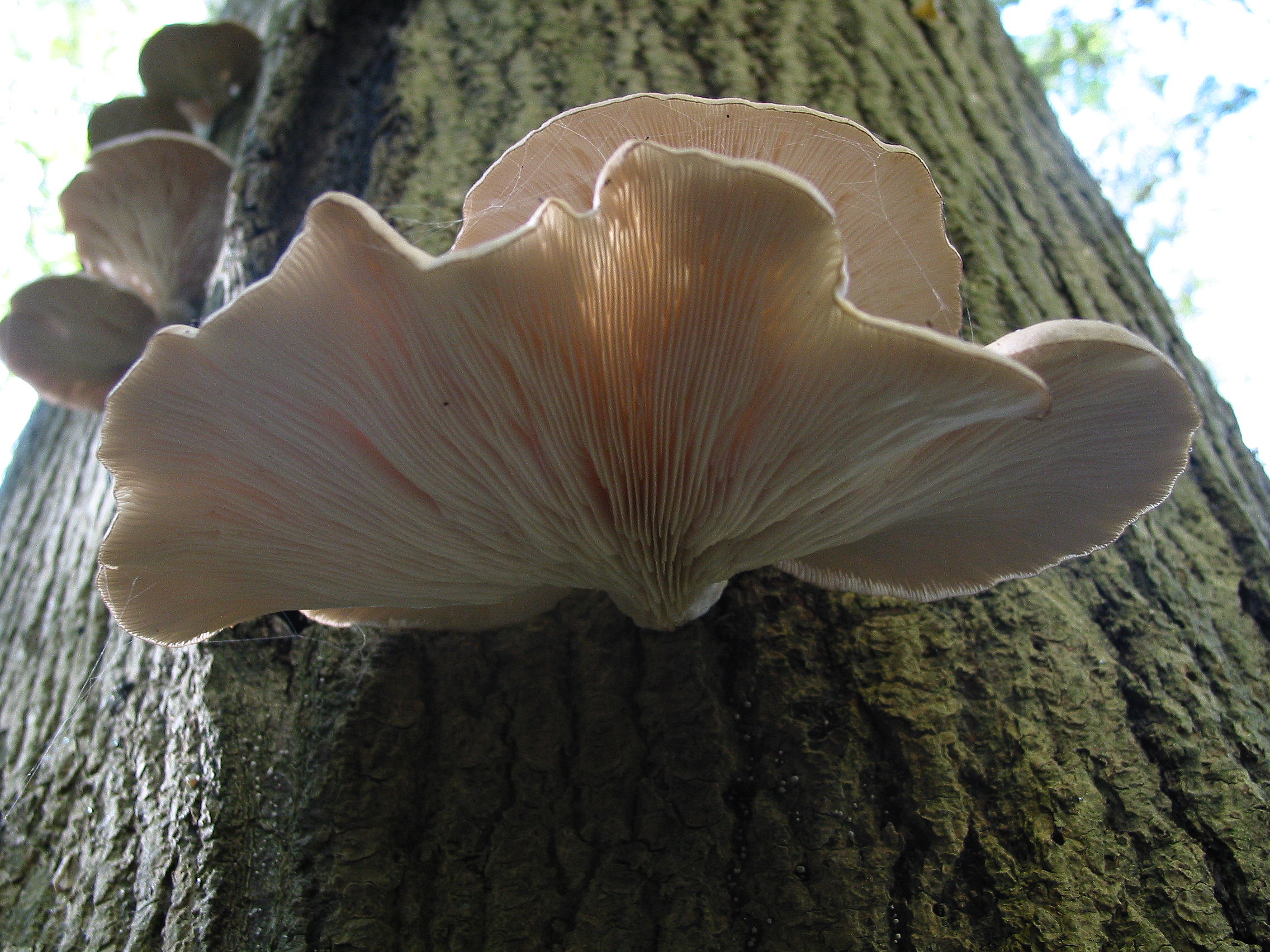 The Oyster mushroom, or "Pleurotus ostreatus", is a common mushroom prized for its edibility. Long cultivated in Asia, it is now cultivated around the world for food. It is related to the similarly cultivated "king oyster mushroom". Oyster mushrooms can also be used industrially for purposes.

Both the Latin and common name refer to the shape of the fruiting body. The latin "pleurotus" (sideways) refers to the sideways-growth of the stem with respect to the cap while the latin "ostreatus" (and the English common name, ) refers to the shape of the cap which resembles the bi-valve of the same name. Many also believe that the name is fitting due to the flavor resemblance to oysters.

In Chinese, they are called "píng gū" (; literally "flat mushroom").

The oyster is one of the more commonly sought wild mushrooms, though it can also be cultivated on straw and other media. It often has the scent of anise due to the presence of . [http://pubs.acs.org/cgi-bin/abstract.cgi/jafcau/1997/45/i10/abs/jf960876i.html]

*Cap: 5-25 cm broad, fan or oyster-shaped; Natural specimens range from white to gray or tan to dark-brown; margin inrolled when young, smooth and often somewhat lobed or wavy. Flesh white, firm, varies in thickness due to stipe arrangement.
*Gills: Gills are white to cream, descend stalk if present. If so, stipe off-center with lateral attachment to wood.
*Spores: The spores form a white to lilac-gray print on dark media.
*Stipe: Often absent. When present it is short and thick.
*Taste: Mild
*Odor: Often has a mild scent of anise.

There are no poisonous lookalikes that grow in North America, however is a toxic lookalike that is found in Australia and Japan.

The Oyster Mushroom is wide-spread in temperate and subtropical forests throughout the world. It is a that acts as a primary decomposer on wood.

The mushroom usually is not fussy where it grows,however it does not like to grow near s. This is probably due to the high acidity of the nettles.

The oyster mushroom is frequently used in Japanese and Chinese cookery as a : it is frequently served on its own, sometimes stuffed, or in recipes with .

Oyster mushrooms are a natural source of drugs. Studies have shown that they typically contain 0.4% to 2.7% statins on a dry weight basis. [http://www.znaturforsch.com/ac/v58c/s58c0062.pdf Z. Naturforsch Study] . A number of studies on lab animals have shown that adding Pleurotus to the diet can reduce cholesterol under some conditions.

The oyster mushroom is also one of the few known carnivorous mushrooms. Its mycelia can kill and digest s. This is believed to be a way to obtain .

Oyster mushrooms contain a small amount of which can cause gastrointestinal distress in some people. Arabitol is a sugar alcohol similar to xylitol, manitol and sorbitol; these sugar alcohols are widely used food additives and can also have laxative effectives in susceptible individuals.