Miss USA 2008, the 57th Miss USA beauty pageant, was held in Las Vegas, Nevada on April 11, 2008.[2] At the conclusion of the final night of competition, Crystle Stewart, Miss Texas USA, was crowned the winner by outgoing titleholder, Rachel Smith of Tennessee. Crystle represented the United States at the Miss Universe 2008 pageant, which was held in Vietnam, where she placed in the Top 10. This is the first time in Miss USA history that two consecutive women of African-American descent have been crowned.

The pageant was held at the Theatre for the Performing Arts, a 7,000 seat theater located in the Planet Hollywood Resort and Casino. The theater was also the location of Miss Universe 1991 and 1996 pageants. This is the first time that the Miss USA pageant was held in Nevada.

For the first time, the competition was broadcast in High Definition.

One delegate from each state and the District of Columbia were chosen in state pageants held from June 2007 to January 2008. 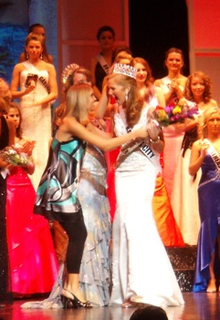