Davidson High School, (abbreviation DHS) is a school located in Frenchs Forest, Sydney, New South Wales, Australia, on Mimosa Street. It is a co-educational high school operated by the New South Wales Department of Education and Training with students from years 7 to 12. The school was established in 1972 as a result of the growing population in the Frenchs Forest and Belrose areas.[2]

Davidson High has a prominent history of involvement in the performing arts, in Dance, Drama and Music, and annually produces the "Season of Performing Arts" at the local Glen Street Theatre.[3] In 2004 and 2007, Davidson High entered the New South Wales Rock Eisteddfod Competition with pieces relating to the Iraq war. Both performances came under a lot of media scrutiny, with a similar result.[4] Many of its alumni have gone on to notable success, some taking high public office and others gaining distinction within their particular fields.

Davidson High School was originally to be called Sorlie High School after George Sorlie, an idealistic developer of land in the district. However, the residents of the area requested a change of name for the suburb, which was granted.[5] The new suburb, and consequently the new high school, was named after Sir Walter Davidson, a popular Governor of New South Wales from 1918 until his death in 1923, and to whom the parklands of 2,500 acres (10 km2) called Davidson Park were dedicated. This forms the western boundary of Davidson.[5]

A meeting was called on 12 August 1971 at Wakehurst Public School. Representatives of the teaching staff and P.&C. Associations of Frenchs Forest, Wakehurst, Mimosa, and Belrose Public Schools, were advised by representatives of the Education Department of a proposed new school adjoining the grounds of Mimosa School. This new school would be known as Davidson High, with the anticipated completion date of January 1973.[2]

The school's earliest students were housed at Killarney Heights High School from 1972-1973. In early 1973, Year 7 classes were situated in Mimosa Public School and Year 8 classes at Killarney Heights Public School. Requiring students, teachers and parents to travel in between schools. The buildings on the present site, designed by the New South Wales Government Architect, Edward Farmer, were first completed and occupied in September 1973.[2] 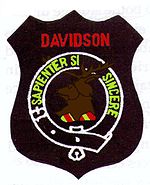 Despite the library not being completed until 1976, the school was officially opened in January 1974 by the NSW Minister for Education, The Hon. Eric Willis.[2] The ceremony was also attended by Dick Healey (Member for Davidson 1971-1981), Harry Turner, (Member for Bradfield, 1952–1974) and the Principal, William Lambert, who said to the students: "...Davidson High is yours, continue the effort that has been made by so many to develop it. Keep building it, with pride and earnest endeavour."[2]

In December 1995, the Head Teacher of Legal Studies, Jan Jones, was awarded the NSW Award at the 1995 National Excellence in Teaching Awards, presented by the Australian Scholarships Foundation.[6] Jones was the Teacher of Legal Studies at Davidson from 1989 until her death in 2000, and the school function room was dedicated as the Jan Jones Room in her memory not long after.[7] Teacher of Music since 1989, Helen Oberg, was also awarded the NSW Minister's Award for Excellence in Teaching in 1995.[6] In October 1997 Davidson High School made a sister School agreement with Morioka Chuo High School in Morioka, Japan.[8] In 1999 Davidson High School was awarded the Director-General's Award for School Achievement for "Achievements in Agenda Priority Areas".[9]

In 2007 the Davidson Community of Schools was unveiled by the Principal, Rod Cawsey, building closer ties with local primary schools, with the intention to enhance the learning of students in the Davidson community through joint educational programs, combined teacher development and the sharing of resources. The community also consists of Belrose, Kambora, Wakehurst, Mimosa and Terrey Hills Public Schools.[10] In 2011, Davidson High signed a school partnership agreement with the Collège Sainte-Anne de Lachine in Lachine, Quebec, Canada.[11]

While at Killarney Heights High School in 1972, the parents of the first students were granted permission by the Lairds of the Clan Davidson to use the crest, shield and tartan of Clan Davidson of Tulloch.[5] The distinctive tartan colours and the stag's head were incorporated in the badge, and are still used as part of the uniform. The Clan Davidson and subsequently Davidson High Motto - 'Sapienter si Sincere' - means 'Wisely if Sincerely' or alternately, 'with wisdom if with sincerity'.[5]

However, during the tenure of the third Principal, Roy Beauman, the motto was altered on the shield from the Latin 'Sapienter si Sincere' to English and the words transposed to read 'Sincerely if Wisely'. The ornate shield was removed from the crest and was produced in green, white, navy and brown.[5] A further change occurred during the tenure of Principal John McManus, and the motto was atered on the crest to 'Wisely Sincerely'. The crest underwent further design changes and was enclosed by a different shield, produced in red and navy.[5]

The Principal of DHS from 1992-1996 was Roslynne Moxham. In 2002, she was awarded a Fellowship of the Australian College of Educators (FACE) for "For contributions through outstanding leadership in NSW high schools and to student learning and teaching practice, particularly in Gifted and Talented Education and Music Education." She has also been Principal of Fort Street High School since 2000.[14]

The Principal of Davidson High from 2002-2005 was Chris Bonnor. During that time he was President of the NSW Secondary Principals Council from 2001–2006 and was also a Member of the Australian College of Educators (MACE). Previously he had also been Principal of Asquith Boys’ High School from 1991-2000. On 26 January 2007 he was appointed a Member of the Order of Australia (AM) in the General Division for "service to education through significant contributions to the development of educational policy and practice in New South Wales, the promotion of excellence in school leadership, and advocacy for public education."[15]

The Principal of Davidson High School from 2006 until his retirement in August 2011 was Rod Cawsey, who, as Deputy-Principal, took over as Acting Principal from Chris Bonnor in the third quarter of 2005, but did not become officially Principal until 2006. Upon his retirement, Deputy Principal Sue Anderson became Acting Principal until Cawsey's successor was chosen.[16] In October 2011, Jann Pattinson was appointed as the new Principal of Davidson High, effective from the 17 November. Pattinson is the coordinator of the Pittwater Community of Schools and also the STEM Project Manager for Macquarie University. Pattinson had previously been the DHS Head Teacher for Teaching and Learning and briefly as acting Deputy Principal before leaving in 2006 to become the Deputy Principal at Moss Vale High School.[17]

A House system was formed by staff at Davidson in 1973. The four houses were originally named Mimosa, Blackbutt, Belrose and Waratah, after prominent local plant species. The present house system was introduced by the second Principal, Austin Hayes, and were named after the individual stars of the Southern Cross.[2] The current houses of Davidson High School and their associated colours are Gamma (Yellow), Alpha (Blue), Delta (Green) and Beta (Red).

The houses compete in three sporting carnivals. In the summer season, a Swimming Carnival is held, and in the winter months an Athletic Carnival. There is also a cross-country run held in the autumn.

Davidson High School has a prominent history in the performing arts, dating back to the school's establishment, with three distinct branches: Music, Dance and Drama.[3]

The music program at Davidson comprises three bands, Concert Band 2 for years 7-10 and Concert Band 1 for Seniors and all capable students, and a Stage Band for all students. The Bands annually perform at the Season of Performing Arts (SOPA) at the Glen Street Theatre, school functions, and at the Northern Beaches Eisteddfod. There are also Instrumental ensembles that deal with smaller groups such as Brass, Clarinet and Saxophone.[18]

The Vocal ensemble, originally formed in 1973, is the oldest musical group in the school and performs throughout the year, including the Season of Performing Arts and the Schools Spectacular.[18]

The School Drama programme consists of ensembles of junior and senior students and of which concentrate on working up performances for the Season of Performing Arts, Drama Nights, and the Regional and State Drama festivals. In recent years the Drama ensemble has done a 'Drama Tour' to local Schools, performing workshops for young students.[19] 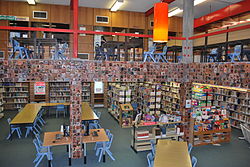 In Dance, students perform in many styles and groups and in many competitions such as the NSW Rock Eisteddfod Challenge, in which Davidson has been performing since it began in 1980 and is the only remaining original school, and the Season of Performing Arts, with a history going back to the 1980s.[20]

The School came under external criticism and media scrutiny when Davidson has entered the 2004 Rock Eisteddfod competition with a performance, named "Bad Night in Baghdad", with a satirical and underlying message about the Iraq war. The dance piece sparked up debate over the alleged "politicisation" of schools and freedom of speech, and was criticised by the then Federal Minister for Education, Dr. Brendan Nelson, who said that the production presented an "extremely biased view" of the war.[21] However, the school and the dance piece were also defended by the Principal of the day, Chris Bonnor, and New South Wales Deputy-Premier and Education Minister, Dr. Andrew Refshauge.[22] Despite this, Davidson went on to take joint first place with Rose Bay Secondary College in the Open grand final and performed at the national competition.[23]

In 2007, Davidson entered a second performance with a similar topic, entitled Bad Knight II, which got the attention of the then Federal Minister for Education, Julie Bishop, who accused the teachers of having "private political agendas" and said that Davidson "interestingly" did the performance around the time of the Asia-Pacific Economic Cooperation (APEC) summit, where U.S. President George Bush and other foreign leaders would be visiting.[4] The performance was defended by the NSW Minister for Education and Training, John Della Bosca, who accused Bishop of using her supposed concern over the school's performance to criticise the public education system: "I think it's another demonstration of how far out of touch Mrs Bishop and her colleagues in the Howard government are...the concern they have is just another (opportunity) to run down the achievements of young people in public education."[24]

The "Season of Performing Arts" or "SOPA" was established in 1994, originally as the "Evenings of Performing Arts", as a means of annually showcasing the best of all the performing arts: Music, Dance, and Drama. It is held in term two over two nights at the local Glen Street Theatre.[3]

Davidson High School has a number of leadership opportunities, including Captaincy, Prefecture and Representative positions. All are recognised in various ways, such as badges, blazers, or blues points. At the instigation of the second Principal, Austin Hayes, the first student council was formed in 1976, and the first School Captains were elected in 1975.[2] The Student Representative Council (SRC) consists of students elected from years 7-11 who are active in the school and have an input into school and student issues.[25]

In senior years there is the Senior Leadership Team, consisting of two School Captains, four School Vice-Captains and the Prefects, who are elected by their year and are ambassadors for the school, directing assemblies and providing leadership for the school and extra-curricular activities.[25]

There are other programs organised for the purpose of developing leadership in students. These include the Flying Squad, who act as peers to Primary Students, going to various schools around the area; and the Peer Mentors from year 10 who support year 7 students through the transition into high school.[10]

Entertainment and the arts