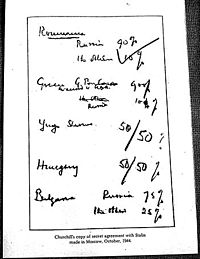 Churchill's copy of secret agreement with Stalin. The document is contained in Britian's Public Record Office, PREM 3/66/7, and is available on request.

The percentages agreement was an alleged agreement between Soviet premier Joseph Stalin and British prime minister Winston Churchill about how to divide southeastern Europe into spheres of influence during the Fourth Moscow Conference, in 1944 . This agreement was made public by Churchill. No confirmation has ever been made by the Soviet Union or Russia, or from the American side, which was represented in the meeting by Ambassador Averell Harriman.

A draft document of the agreement, which was yet to be made in 1944, appeared under strange circumstances when it was supposedly intercepted in 1943 and fell into the hands of Spanish dictator Francisco Franco's secret service. This was mentioned by General Jordana, in a famous speech he gave in April 1943 in Barcelona[1] On October 9, 1944 Churchill and Stalin met at the fourth Moscow Conference. Churchill's account of the incident is the following: Churchill suggested that the Soviet Union should have 90 percent influence in Romania and 75 percent in Bulgaria; the United Kingdom should have 90 percent in Greece; in Hungary and Yugoslavia, Churchill suggested that they should have 50 percent each. Churchill wrote it on a piece of paper which he pushed across to Stalin, who ticked it off and passed it back.

"Might it not be thought rather cynical if it seemed we had disposed of these issues so fateful to millions of people, in such an offhand manner? Let us burn the paper", said Churchill.

"No, you keep it", replied Stalin.

The two foreign ministers, Anthony Eden and Vyacheslav Molotov, negotiated about the percentage shares on October 10 and 11. The result of these discussions was that the percentages of Soviet influence in Bulgaria and, more significantly, Hungary were amended to 80 percent – apart from that, no other countries were mentioned.

Historian Gabriel Kolko has noted that, "There is little significance to the memorable and dramatic passage in Churchill's autobiography recalling how he and Stalin divided Eastern Europe":

If this agreement was true, then Stalin did keep to his promise about Greece, but did not keep his promise for Romania, Bulgaria, and Hungary, which became one-party communist states with no British influence. Yugoslavia remained a non-aligned state in line with the Percentage agreement, though it was a one- party communist state, with very limited British influence. Neither did Churchill keep his promise about Greece, which became a one-party junta with no Soviet influence. Britain supported the Greek government forces in the civil war but the Soviet Union did not assist the communist partisans.[3]
However, doubts should be raised regarding the accuracy of Churchill's account, which seems to serve political purposes at the time. First, it seems odd that the negotiating a matter of such importance takes place without the direct involvement of the Americans. They are represented only by their ambassador, Averell Harriman perhaps as an observer. Second, the agreement note, which Stalin is supposed to have read, is written in English. Finally and most importantly, Russia appears on it instead of Soviet Union. This is a matter that would have been hard for Stalin to endorse since the Soviets were very sensitive in keeping appearances.