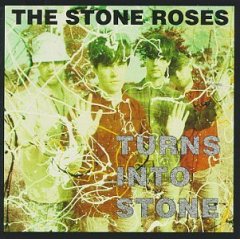 
"Turns Into Stone" is a compilation album by released in 1992. It consists of early singles and B-sides that did not feature on their self-titled debut album. The compilation reached number 32 on the UK album chart.

The album's release was surrounded by controversy, as the Roses were in the middle of a legal battle with their then-record label, Silvertone. The injunction that this case resulted in prevented the band from releasing any new material for some years afterward, in which time Silvertone re-released single after single, including two separate versions of "Fools Gold", and even taking singles from the first album which weren't even intended to be singles (such as the edited version of "" featuring a drum machine instead of Reni's distinctive drumming).

Despite this, the album is seen as a good thing by Roses fans because it collects some of their best-known songs onto one CD, before a best-of compilation was even viable.