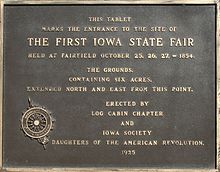 The area now known as Jefferson County was first settled in 1836, and became Jefferson County in 1839, with the new town of Fairfield as the county seat. The name was suggested by Nancy Bonnifield, one of the settlers, because it aptly described the fair fields of the area. But also author Susan Welty suggests it was a play of words on her own name (bonny field).[6][7] By 1840 the town had a population of 110 and grew to 650 in 1847.[8] The town was the site of the first and second Iowa State Fair.

Fairfield's library was established in 1853, and was the first library in the state of Iowa. It was first housed in a rented room off the city square. The Carnegie building on the corner of Washington and Court streets became its home in 1893. Then in May 1996, the library moved to its present location on West Adams Street. The library has over 220,000 items and received accreditation from the State Library of Iowa in 2009.[9][10]

Subdivisions that border Fairfield include Cypress Villages, a 145-acre (0.59 km2) subdivision under development as a "green" community using principles of Maharishi Sthapatya Veda to the north of the city, and Abundance ecovillage, an off-the-grid community north of Fairfield. The Fairfield City Council declined petitions for annexation from Cypress Villages.[12][13][14][15][16][17][18] In addition, nearby Maharishi Vedic City, located two miles (3 km) north of Fairfield, began as a subdivision and incorporated as a city in 2001.[19]

Fairfield's geography is typical of the great plains of the American Midwest: around the city is rolling farmland specializing in corn, soybeans, cattle and hogs. Running west-east through the city is U.S. Route 34; the city of Burlington is to the east and Ottumwa to the west. North-South is Iowa Highway 1, leading north to Iowa City and south to the Missouri state border.

There were 4,063 households out of which 30.0% had children under the age of 18 living with them, 45.2% were married couples living together, 10.1% had a female householder with no husband present, and 41.6% were non-families. 35.9% of all households were made up of individuals and 12.0% had someone living alone who was 65 years of age or older. The average household size was 2.22 and the average family size was 2.90.

According to an article in the New York Times the town "thrives largely on its abundance of start-up companies".[23] The Agri-Industrial Products company was founded in 1978 and has become the nation's "largest producer" of roadside construction barrels and other plastic products.[23] The town is also home to Creative Edge, a global manufacturer of ceramic tiles.[24]

In 1990, Iowa Governor, Terry Branstad, called the town "one of the state's economic superstars".[25] A 1997 report said the town had a significant number of entrepreneur businesses including a tofu company, several software firms, a chimney supplies wholesaler, wholefoods grocery store, an oil brokerage, and a telecommunications company.[26] These new companies were reported in 1999 to have "created up to 1,500 jobs in high tech businesses ranging from telecommunications companies to Internet providers to PC-oriented magazines".[27] Later, the town was dubbed "Silicorn Valley" because of the preponderance of new businesses that were Internet and information based.[23][27]

In 2003 a report by the National Center for Small Communities selected Fairfield as a recipient of the The Grassroots Rural Entrepreneurship Award, saying that the city "has become recognized as one the nation’s most entrepreneurial small towns." The report said that Fairfield had created over 2,000 jobs in the previous 15 years and that new construction averages $10 million per year.[28] That same year it received the Community Vitality Center's Entrepreneurial Community of the Year award.[29] According to City officials, Fairfield received investments of over $200 million in venture capital from approximately 1990 to 2004.[30]

In 2008, the town was the "home of 40 software development and telecom companies".[31] According to a 2009 report from the University of Iowa's Community Vitality Center, Fairfield has had more than $250 million invested in 50 companies since 1990. These companies have included various financial services as well as marketing, software development and telecom businesses. This has created 3000 local jobs plus "12,000 jobs globally, and nearly $1 billion in new equity".[32]

Beginning in 1974 Maharishi University of Management began attracting hundreds of students from around the world. After a world peace conference in 1979, about 800 people moved to Fairfield after being urged to do so by the university's founder. [34]Fairfield has been described as the home of the Transcendental Meditation movement.[35] It has been called a "national magnet" and "the world's largest training center" for practitioners of TM.[36][37][37] Many of its current residents moved there to participate in the group practice of the TM-Sidhi program inside one of the Maharishi University of Management's two golden domes. Locally, TM practitioners are sometimes called "roos", slang for gurus, a term they have appropriated, although they also refer to themselves as "meditators".[27][38][39] Fairfield natives are sometimes known as "townies".

On the first Friday night of every month, Fairfield hosts the 1st Fridays Art Walk,[40] which attracts more than 2500 visitors and showcases local and national artists in downtown galleries and occasional live, outdoor music.[41]

Maharishi Vedic City, conceived by the Maharishi and incorporated by a group of his followers in 2001, is located a few miles north of Fairfield. In 2005, the town's Friday Art Walk was named Iowa's Tourism Event of the Year.[42]

In 2006, the town was named one of the "12 Great Places You've Never Heard Of" by Mother Earth News magazine citing its ayurvedic health spa, high amount of restaurants per capita and 25 art galleries, characterizing it as a "sustainable and cosmopolitan town".[43]That same year, the Iowa Department of Cultural Affairs has designated Fairfield as one of the Iowa Great Places.[44][45]

Fairfield is home to the Fairfield Arts & Convention Center (FACC), built in 2007, which includes the Stephen Sondheim Center for the Performing Arts. The center is the first theater named after Stephen Sondheim and the opening was attended by seven Broadway actors connected with Sondheim's plays.[46][47][48] In May 2010, the facility became "essentially" city-owned, following a city wide vote.[49]

In 2009, a concert by The Beach Boys and The Nadas was held on the Fairfield Middle School grounds, as a benefit for the FACC and the city's Green Sustainability Plan.[50] The concert was sponsored by the David Lynch Foundation. This was the 40th, and final performance of The Beach Boy's summer tour of 2009.[51]

Fairfield was selected by the Iowa Department of Cultural Affairs to be one of six Iowa Great Places to participate in new program to revitalize the cultural arts in 2010.[52]

The early architecture in Fairfield included Victorian houses such as one designed by George Franklin Barber[53] as well a 1915 house designed by Barry Byrne, who trained under Frank Lloyd Wright.[54] A 1930s bank building was designed in the Streamline Moderne style.[55] Commercial and institutional architecture were influenced by the Louden Industries, including the Louden Foundry.[56] Fairfield is the site of the oldest Carnegie library in the United States west of Pennsylvania. The grant effort was spurred by Senator, James F. Wilson. The Richardsonian Romanesque work is now operated by Indian Hills Community College as a satellite campus building, as a new library was built in 1996.[57]

In the late 1990s, some new construction appeared influenced by the Vedic style of architecture.[58] Many homes and commercial buildings in and around the city are built according to Maharishi Sthapatya Veda principles, which include a requirement that entrances face due east or due north.[59] Businesses and homeowners have boarded up entrances that face in inauspicious directions (south or west).[38]

Two of the largest landmarks in Fairfield are the twin Golden Domes on the MUM campus,[citation needed] built in 1980 and 1981, which are centers for the group practice of the TM-Sidhi program.

The town has 12 public parks and recreation areas consisting over 1,300 acres (over 5.5 km2) and a "master trail plan" underway that includes a 17-mile (27 km) trail system. [60] Some of the trail is paved, five miles (8 km) of trail is covered with lime chips while other areas include traditional wooded paths. The trail system connects several areas of interest including the Neff Family Wetlands dike, and the BNSF Trail segment, which crosses a new bridge that joins Walton Lake with Chautauqua Park. The final trail plan includes a "heritage path" leading to historical sites and a water trail that connects the area's river and three lakes.[61][62] 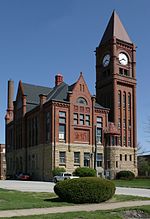 Fairfield's grassroots efforts to create a sustainable community that focuses on reducing energy and protecting resources have been supported by a position created by Iowa State University extension services and the City of Fairfield.[64]

Fairfield's mayor, Ed Malloy, was named by MSN.com to a nationwide list of 15 "green" mayors.[65] Malloy describes the city's agenda for sustainability as aggressive, and includes a Green Strategic Plan covering everything from conservation, local farms, local food, alternative transportation, and bike paths and trails.[66] The hope, according to Malloy, is that Fairfield will become a model community and a "virtual template" for small cities interested in creating a sustainable city environment.[65] The city received an $80,000 grant from Iowa's Office of Energy Independence to hire a program coordinator, collect data and create a sustainability plan to be completed in 2020.[67][68]

The town hosts an annual Eco-Fair and has more solar energy homes and green building than any other Iowa town.[43] Fairfield's KRUU-LP is said to be the only radio station in the USA that uses solar energy for its operations and radio signal.[12]

The city has an ordinance[69] that defines several breeds of dogs, including Doberman Pincher, Pit Bull, Rottweiler, German Shepherd, Belgian Malinois, Siberian Husky, Malamute and any other dog weighing over 100 pounds (45 kg) as dangerous animals. The ordinance includes a number of special provisions and requirements but has an exception which allows owners to walk listed dogs if the leash is no more than four feet long and the collar includes current vaccinations tags.[70][71]

The Fairfield Community School District is home to nearly 2,500 students, teachers, administrators and staff, with three elementary schools (Pence Elementary, Washington Elementary, and Libertyville Elementary), a middle school, and a 3A high school. The high school has approximately 630 students and 75 staff members. The current high school building was built in 1939 on 23.2 acres (94,000 m2). The total cost of the construction was approximately $550,000. In 1984, an addition to the school provided a commons area, new library, new kitchen, a counseling office, and an expansion of the gymnasium. In the 2001-2002 school year, the district added a new transportation building.[72]

Fairfield also has two private schools, Maharishi School of the Age of Enlightenment and Cornerstone Primary School.[73] The town is home to Maharishi University of Management, a private university which moved to Fairfield in 1974 after the closure of Parsons College.[6]

In 2010, Lincoln Elementary school was closed due to budget cuts. Also, all fifth grade classes were moved to the Fairfield Middle School.[74] The Fairfield school board voted to use the building for Fairfield High School's alternative school in 2010-11.[75] Fairfield was also home to Fairfield Christian School for a number of years.[72][76][77]

The nearest international commercial airport is in Cedar Rapids, approximately 90 miles (140 km) to the north. Fairfield has a small airport north of town, which was built in 1967 and renovated in 2006. The Fairfield Municipal Airport is a general use, public airport. It offers 5,550 feet (1,690 m) of concrete runway.[72] Bus service to Fairfield is provided by Greyhound Lines affiliates Jefferson Lines and Burlington Trailways.

Amtrak carries passengers west-east on the California Zephyr, with passenger stations in Mount Pleasant, (25 miles to the east) and Ottumwa (20 miles to the west). Rail service is by Burlington Northern Santa Fe (BSNF) railway.

The Rock Island Line also passed through Fairfield, but closed in the late 1970s. The old steel trestle has been removed from its crossing, and the walking trail that circumnavigates the city uses part of the old roadbed.[78]

Evidence of other long forgotten rail lines can be found in the woods around the city. A section of narrow gauge roadbed can be found cutting its way through Whitham Woods, a park on Fairfield's western edge.[79]