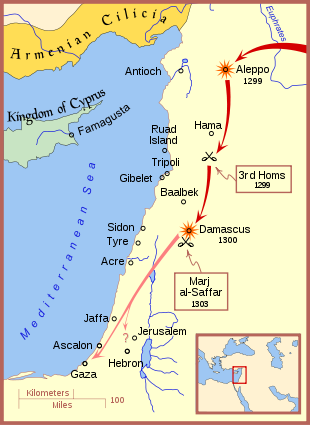 The Battle of Marj al-Saffar in context of the Mongol offensives in the Levant, 1299-1300

The Battle of Marj al-Suffar, also known as the Battle of Shaqhab, took place on April 20 through April 22, 1303 between the Mamluks and the Mongols near Kiswe, Syria, just south of Damascus. The battle, a disastrous defeat for the Mongols, put an end to Ghazan Khan's invasions of Syria.

A string of Mongol victories, starting in 1218 when they invaded Khwarezm, quickly gave the Mongols control over Persia as well as the Seljuk Sultanate of Rum of Asia Minor. Incorporated troops from submitted countries such as Cilician Armenia and the Kingdom of Georgia, in 1258, the Mongols sacked Baghdad (see Siege of Baghdad (1258)), followed in 1260 by the taking of Aleppo and Damascus. Later that same year, the Mongols experienced their first major defeat at the Battle of Ain Jalut, which eventually forced the Mongols out of Damascus and Aleppo and back across the Euphrates.

Nearly 40 years later, the new Khan, Ghazan, once again invaded Syria, retaking Aleppo in 1299. Ghazan defeated Mamluk forces at the Battle of Wadi al-Khazandar (3rd Battle of Homs) that same year, and Damascus quickly surrendered to him. After sending raiding parties as far south as Gaza, Ghazan withdrew from Syria.

Events just before the battle

In 1303, Ghazan sent his general Qutlugh-shah with an army to recapture Syria. The inhabitants and rulers of Aleppo and Hama fled to Damascus to flee the Mongols. However, Baibars al-Jashnakir was in Damascus and sent a message to the Sultan of Egypt to come to fight the Mongols. The Sultan left Egypt with an army to meet the Mongols in Syria and arrived while the Mongols were attacking Hama. The Mongols reached the Damascus outskirts on April 19 to meet the Sultans army. The Mamluks led them to Shaqhab where the battle would take place.

The battle started on 2 Ramadhan 702 in the Hijri calendar, or April 20, 1303. Qutlugh-Shah's army was positioned next to a river. The battle started by Qatlugh-Shah's left wing attacking the Mamluk's right wing with his brigade of 10,000 soldiers; the Egyptians reportedly suffered heavy casualties. The Mamluk center wing and left wing under the command of Emir Salar and Emir Baibars al-Jashnakir then came to fight the Mongols; however, the Mongols kept pushing the right flank of the Egyptian army and many of the Muslims thought the battle would be lost. The Mamluk left flank, however, held out.
Qutlugh-Shah went to the top of a nearby hill hoping to watch the victory of his forces, and whilst he was giving orders to his army, the Egyptians surrounded the hill. This led to the Mongols suffering heavy casualties on the hill. The next morning the Mamluks deliberately opened their ranks to let the Mongols flee to the river, Wadi Arram. However, when the Mongols reached the river to drink, the Sultan attacked the Mongols, and the fighting lasted till noon. By the next day, the battle was over. [2]

According to the medieval Egyptian historian Al-Maqrizi, when Qutlugh-Shah reached Ghazan at Kushuf after the battle to inform him of the defeat of the Mongols, the Khan became wild with rage resulting in a hemorrhage in his nose.[3]

Messages were sent to Egypt and Damascus to tell of the victory, and the Sultan went to Damascus. While the Sultan was in Damascus the Mamluk army kept chasing the Mongols as far as Qariyatain. When the Sultan returned to Cairo, he entered Bab al-Nasr (Victory Gate) with chained prisoners of war. Singers and dancers were called from all over Egypt to celebrate the great victory. Castles were decorated and the celebrations lasted many days.