Acorn Antiques
This article is about the parodic soap opera. For the musical, see Acorn Antiques The Musical. 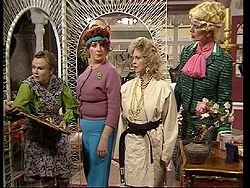 Acorn Antiques is a parodic soap opera written by Victoria Wood as a regular feature in the two seasons of Victoria Wood As Seen On TV, which ran from 1985 to 1987. It was turned into a musical by Wood, opening in 2005.

Wood originally wrote Acorn Antiques as a weekly slot in her sketch shows Victoria Wood As Seen On TV. She based it on the long-running ATV serial Crossroads, and radio soap Waggoners Walk.[1][2] Swipes were also taken at current soaps such as EastEnders and Coronation Street with their apparent low production values, wobbly sets, overacting, appalling dialogue and wildly improbable plots.

Its premise - the lives and loves of the staff of an antiques shop in a fictional English town called Manchesterford - hardly reflects the ambitious and implausible storylines, which lampooned the staples of soap operas: love triangles, amnesiacs, sudden deaths and siblings reunited.

It also satirised the shortcomings of long-running dramas produced on small budgets with its little artificial-looking set, missed cues, crude camera work and hasty scripts. A lack of continuity is seen in distinct lapses where storylines are introduced and dropped between episodes and character development is forgotten. One episode, for example, is introduced as reflecting the current interest in health fads with a plot where the antiques shop is merged into a 'Leisure centre and sunbed centre', never to be mentioned again. The deliberately haphazard opening and end credits, together with its tinny title music, also lampooned Crossroads. Perhaps the most comical element of Acorn Antiques were the missed cues, harking back to the days when Crossroads was recorded live. Fictional floor managers and directors can be heard prompting the dreadful actors to say their lines, whilst the end of several scenes show the actors not quite knowing what to do with themselves while the camera is still rolling.

References to other daytime television devices featured; after one episode a continuity announcer mentions an exhibition of costumes from the show touring several British towns, and after another episode a range of novelisations is mentioned (bearing such archetypical purple titles as A Waning Moon, and little resemblance to screened storylines). The announcement that the show's theme tune was available to buy as Anyone Can Break A Vase sung by Miss Babs, was a reference to the release of Anyone Can Fall In Love, based on the EastEnders theme and sung by one of its cast members, Anita Dobson.

Wood also created a spoof arts documentary about the show for her As Seen on TV special, in keeping with similar straight-faced 'behind-the-scenes' shows produced about soap operas, which revealed the shambolic production of Acorn Antiques being put together, and interviewed the self-obsessed fictional actors behind the fictional characters. At one point, when an obvious continuity error is pointed out, the hard-nosed producer 'Marion Clune' (played by Maggie Steed) summed up the directorial attitude: "We professionals notice - Joe Public never clocks a darn thing." The documentary also depicted the actress portraying the drudge Mrs. Overall as being an archetypal soap diva called Bo Beaumont (although in the series the fictional end titles shows Mrs Overall credited to Julie Walters).

In the final show of Victoria Wood As Seen on TV a sketch was shown where the actors playing Mrs Overall and Mr Clifford are supposedly sacked from the soap and killed off and Bo Beaumont/Julie Walters breezes out of the studio, complaining to the TV news crew outside "Does a faithful dog expect to be kicked? That show was my life."

The sketches even lead to a fanzine and appreciation gatherings where fans would dress up as the characters.[3] In 2004, in a poll on its website, Channel 4 voted Acorn Antiques the 7th best comedy sketch of all time.[4]

The show made a brief return to television in 1992 in Victoria Wood's All Day Breakfast, her satire on daytime television.[5] A sketch of its soap, The Mall, ends with Mrs Overall returning to reopen Acorn Antiques, mentioning that the other principal characters had been killed in a bus crash (even though she herself had been killed off in the final episode of the original series). A special one off episode was broadcast in 1996 in a programme to commemorate 70 years of BBC1 being on air. One final sketch was shown in 2001 with the original cast and Nick Frost as an armed robber (as part of Victoria's History of Sketch Comedy BBC1 series).[6] 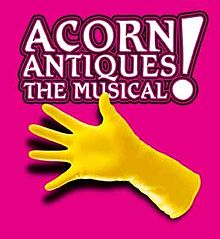 In 2005, Victoria Wood created a musical version, with key members of the original cast (Julie Walters, Celia Imrie amongst others - Wood alternated with Julie Walters in the role of Mrs Overall), which had a sellout season in the West End.

The show earned several Olivier Award nominations, and winning Best Supporting Actress in a Musical for Celia Imrie. The original run was directed by Trevor Nunn. Standout songs included "Have You Met Miss Babs?" and "Macaroons".

It was revived on tour in 2007, directed by Victoria Wood.

Leighton Maqueraders in 2010 were the first amateur drama group to do the show in 2010. Acorn Antiques The Musical ran at Leighton Buzzard Library Theatre from June 16–19. Leighton Masqueraders performed the comedy to a full house and the production impressed their star guest Victoria wood, writer of the musical.[7]