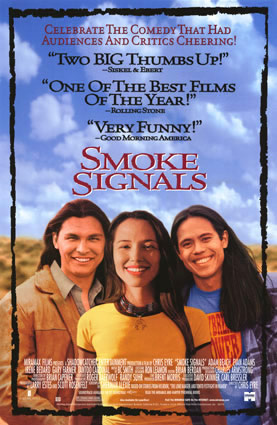 "Smoke Signals" (1998) is an directed by . The film was adapted from several characters and short stories in "" by , including "This is What it Means to Say Phoenix, Arizona", but also from Sherman Alexie's other works. The film has the distinction of being the first motion picture with an exclusively Native American creative team. It was the first movie written, directed, acted and produced by Native Americans, and distributed by a major motion picture distributor, Miramax. It won several awards and accolades, and was well-received at numerous film festivals. It is rated PG-13 for "Some intense images" by the .

The story centers around Victor Joseph () and Thomas Builds-the-Fire () on the Coeur D'Alene Indian Reservation in Plummer, . Thomas is the eccentric tribe storyteller and Victor is an assertive basketball player with a brooding disposition.

The two young men are linked through Victor's father, Arnold (). Arnold rescued Thomas as an infant from a house fire that killed his parents. Consequently, Thomas considers him a hero. On the other hand, Victor, who endures Arnold's , , and eventually abandonment, regards his father with both deep love and bitter resentment. Thomas and Victor grow up together as neighbors and acquaintances, fighting with each other and simultaneously forming a close, albeit uneasy, alliance.

When Arnold dies in Phoenix, , where he has settled after separating from Victor's mother Arlene (), Victor and Thomas embark on a cross-country journey to retrieve his ashes and belongings. The trip turns out to be a soul-searching endeavour for both men. Neither of them lose sight of their identity as "Indians", but their perspectives differ. Victor is more al and pragmatic, and Thomas is more idealistic and traditional (and romantic to the point of watching the feature film "" countless times). This dichotomy continues all through the film and is the source of Victor's irritation with Thomas, and Thomas's fascination with Victor.

Once in Phoenix, Victor must confront his conflicted feelings toward his father, as well as his own identity. He also must grapple with information provided to him by his father's friend, Suzie Song (); namely, the true origins of the fire that killed Thomas' parents. Arnold, drunk one night, accidentally shot off a firework into the living room window, causing the fire in his neighbors house. The trip turns out to ultimately cure Victors brooding disposition towards life and shows him why his father became an alcoholic, was abusive, and eventually left their family. The film concludes with Victor achieving a better understanding of Thomas and Thomas' unconditional reverence for Arnold.