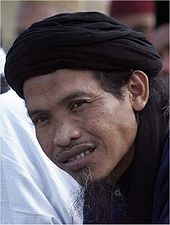 Huda bin Abdul Haq (also known as Ali Ghufron, Muklas or Mukhlas[1]) (February 1960 – 9 November 2008) was an Indonesian who was convicted and executed for his role in the 2002 Bali bombings. He was a senior and influential Jemaah Islamiah leader with ties to Osama bin Laden.[2]

Different reports place Muklas' birthdate at either 2 February or 9 February 1960, in Solokuro, Lamongan, East Java. He attended the Al-Mukmin Islamic school founded by Abu Bakar Bashir with his brothers Amrozi and Ali Imron. He recruited these two brothers to manufacture the explosives and purchase the vehicles used in the 2002 Bali bombing.

After graduating from Al-Mukmin, Muklas sought to continue his Jihad studies at various training camps in Afghanistan. He fought in the Afghanistan-Soviet civil war between 1980 and 1989, as a member of Osama bin Laden's "International Brigade." Muklas admitted that he met with Osama bin Laden in 1987, and that; "he and other top JI personnel were careful to nurture ties to bin Laden and al-Qaida in the years that followed." Muklas secured the funds, through senior JI member Hambali, needed to perform the 2002 Bali bombing.[2]

After the eventual defeat of the Soviet Union and installation of the Taliban as Afghanistan's rulers, Muklas returned to South East Asia to conduct operations for Jemaah Islamiah. He was named head of JI's "Mantiqi One", a regional network covering Sumatra, Singapore, Malaysia and southern Thailand.

Muklas then co-founded an Islamic school in Malaysia that was to be used as a local training ground for JI operatives.

In 1991, Muklas, at the behest of Abdullah Sungkar and Abu Bakar Bashir founded Lukmanul Hakiem, a pesantren or Islamic boarding school based on his old school at Ngruki. It was created to link up with other madrassahs and serve to recruit future jihadists. Lukmanul Hakiem employed Noordin Mohammad Top, a Malaysian national, as school principal and he used this role to recruit Muhammad Rais and others for the 2003 Marriott Hotel bombing in Jakarta.

Abu Bakar Bashir, Abdullah Sungkar, Muklas, Noordin Top, all taught at the school. JI bomb maker Azahari Husin served on the board of directors. Noordin Top was promoted to director, when Malaysian law was adjusted, however Muklas continued to operate as leader by proxy.[3]

Muklas himself admitted to being present and in command at the planning meetings for the Bali bombings, and recruited two of his brothers to help assemble and transport the bombs used in the Bali attacks. A sum of money, amounting to approximately US $35,000 was contributed to the Bali bombings by Wan Min Wan Mat, a leader of the JI network in Malaysia. This money was transferred through Hambali, Jemaah Islamiah's head of operations. The money was provided in cash, specifically in US dollars, and according to claims by Muklas, the money was not just used for the bombings in Bali, but also in other attacks in Indonesia.

After acquiring the al Qaeda funds, Muklas recruited two of his brothers to handle the logistics of the bomb plot. Younger brother Amrozi, who is also situated on "death row" for his conviction in the attack, personally selected the Mitsubishi van that was to be used outside the Sari Club. Amrozi also assembled the car bomb, and backpack bomb used at Paddy's Pub, in an empty warehouse in Denpasar, Bali's capital city.

In December 2002, Muklas was arrested while hiding in Java. He confessed to police that he was the head of one of Jemaah Islamiah's four cells and had ordered the Bali bombings. He admitted to being present and in command at the planning meetings for the Bali bombings, and that he had recruited two of his brothers to help assemble and transport the bombs used in the attacks.

He also confessed that another Jemaah Islamiah leader Riduan Isamuddin, (a.k.a. Hambali), had provided the funds for the attacks. In a transcript of his police interview he explained;

"I do not know for sure the source of the aforementioned money from Hambali, most probably it was from Afghanistan, that is, from Sheikh Osama bin Laden. As far as I know, Hambali did not have a source of funds except from Afghanistan."

A JI leader in Malaysia, Wan Min bin Wan Mat, later revealed to police that he had given Muklas cash amounting to approximately US $35,000 for the operation, at Hambali's request. He also asserted that the money had come directly from al-Qaeda, and that the money was not just to be used for the bombings in Bali, but also for other attacks in Indonesia.[4]

At his trial, two hundred witnesses linked Muklas with the attacks.

On 2 October 2003, before a panel of five Indonesian judges, Muklas was found guilty and sentenced to death. He was the third Bali bomber to receive the death penalty after his brother Amrozi and Imam Samudra. Judge Cokorda Rai Suamba summed up the trial with; "The defendant has been legally and convincingly proven guilty of having, together with the others, planned an act of terrorism and also of being in illegal possession of explosives, We punish the defendant with the death sentence.''

Muklas showed no remorse during the proceedings and used his time in court to denounce George W. Bush and the United States. He declared that the terrorist atrocity was "carried out to avenge the suffering of Muslims at the hands of America and Israel."

Upon hearing the sentence he immediately started screaming "Allahu Akbar" and began doing star jumps. He then hugged his lawyers and told the court the judgement was made under laws he did not believe in. Despite his professed wish to die as a martyr, he like Amrozi and Samudra appealed against the sentence. During the trial Muklas showed no remorse for the attacks and like other Bali suspects, used court appearances to verbally attack the United States.[5]

Originally incarcerated in Denpasar's prison, he was moved to the high-security prison island of Nusakambangan in October 2005.

Together with the two other bombers who received death sentences, he launched a constitutional challenge against the use of firing squads. Mukhlas preferred beheading.[6]

In October 2008 he remained unrepentant and claimed revenge would be taken for his death.[7] During the month, his final appeals were rejected and the Attorney General's office announced that he would be executed by firing squad in early November 2008.[6]

According to a source in Indonesia's Attorney General Office, the execution were to be done before the end of Sunday, 9 November 2008. This was reportedly delayed from the original plan to allow a representative from the family to identify the body post-execution. From Mukhlas's family, his younger brother, Ali Fauzi were sent as a representative of his family.[8][9]

Mukhlas, along with Amrozi bin Nurhasyim and Imam Samudra were shot on 00.15 local time on 9 November 2008. They were executed by firing squad.[10]