Ali Al Salem Air Base (ICAO: OKAS) is a military airbase situated in Kuwait, approximately 23 miles from the Iraqi border. The airfield is owned by the Government of Kuwait, and during Operation Southern Watch and Operation Telic / Operation Iraqi Freedom hosted Royal Air Force (RAF), United States Air Force (USAF) and United States Marine Corps (USMC) personnel and aircraft. Since those operations, the base has been returned to the control of the Kuwaiti Government, with the USAF continuing to maintain a presence alongside their Kuwait Air Force counterparts. The principal USAF unit on base is the 386th Air Expeditionary Wing (386 AEW). 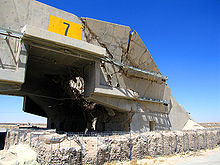 Significant bomb damage to a HAS incurred during the first Persian Gulf War in 1991. Bomb damage caused by precision guided "bunker busting" munitions is still visible 15 years after the liberation of Ali Al Salem.

In 1990, the base was the last to be overrun by the Iraqi Military. On August 3, Ali Al Salem was the only air base not occupied by Iraq. A small number of Kuwaiti regulars, staff officers, and the base General stayed to fight, and organize resupply missions from Saudi Arabia, by the end of the day, Ali Al Salem had been overrun as well however. Upon discovery by the Iraqi military, the Kuwaiti General was hanged from the base flagpole by Iraqi troops.[citation needed] New flagpoles have since been installed, however as of December 2007, the original pole still stands. The remaining Kuwaiti military personnel were lined up outside the old Kuwaiti officers' club and shot.[citation needed] While no longer used, the building and bullet holes remain.

Prior to 1990, the French, under contract, built large reinforced concrete Hardened Aircraft Shelters (HAS) for the Kuwaiti Air Force. The French told the Kuwaitis that the structures were impenetrable[citation needed]. After Iraq took over the base, they moved the Kuwaiti aircraft and parked the Iraqi aircraft in the hangars. The French impenetrable claim turned out to be wrong when the US and allied forces, in the opening hours of Desert Storm, destroyed the concrete bunkers by use of GBU bombs. The Kuwaitis are still involved in legal suits[citation needed] over the "impenetrable clause of the contract". The French claim that they had no way of foreseeing that the US had invented bunker busters - some say that the French intended for the bunkers to protect against Soviet-procured Iraqi weapons.[citation needed]

The Kuwait Air Force Flight Training School is located at Ali AlSalem AB and it is the home base of following squadrons:

The Royal Air Force operated out of AAS from late 1998, just before Operation Desert Fox. The RAF detachment consisted of various non-formed units, and a rotating Squadron of Panavia Tornado GR1As and later Tornado GR4s. The base was rapidly expanded in early 2003 to base the Joint Helicopter Command assets prior to start of Operation Telic, the British designation for the US designated Operation Iraqi Freedom.

During the war, the RAF amalgamated five Tornado GR4 Squadrons based at AAS to form the Ali Al Salem Combat Air Wing, commanded by Wing Commander Paddy Teakle OBE (OC 31 'Goldstars' Squadron). He was awarded the DSO for his leadership.

The RAF had relocated to Al Udeid Air Base, Qatar by 2004, though some elements remained through 2008, and it serves as a backup and emergency strip for RAF operations.

The base currently hosts several military units besides the Kuwaiti Air Force.