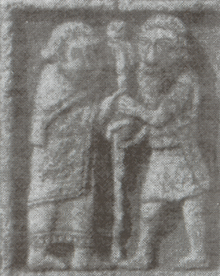 Scene from the east face of the Cross of the Scriptures, Clonmacnoise. The figures probably represent Saint Ciarán and Diarmait mac Cerbaill founding Clonmacnoise: "Then Ciarán planted the first stake, and Diarmait son of Cerball was along with him. Said Ciarán to Diarmait when setting the stake, 'Let, O warrior, thy hand be over my hand, and thou shalt be in sovranty over the men of Ireland.'"[1]

Diarmait mac Cerbaill (died c. 565) was King of Tara or High King of Ireland. According to traditions, he was the last High King to follow the pagan rituals of inauguration, the ban-feis or marriage to goddess of the land.

While many later stories were attached to Diarmait, he was a historical ruler and his descendants were of great significance in Medieval Ireland.

It is believed that the earliest of the Irish annals which came to make up the lost Chronicle of Ireland were kept as a contemporary record from no later than the middle of the 7th century, and may be rather older as it has been argued that many late 6th century entries have the appearance of contemporary recording. There is general agreement that the annals are largely based, in their earliest contemporary records, on a chronicle kept at the monastery on Iona, and that the recording moved to somewhere in the midlands of Ireland only around 740. Although it is thus possible that the records of Diarmait's times in the annals are nearly contemporary, the later history of the annals is complex and much debated, so that it is uncertain to what extent surviving late annals such as the Annals of Ulster and Annals of Tigernach faithfully reproduce the earlier records. The sparsity of the annalistic record, its laconic manner of reporting, and the complex history behind the surviving records mean that there is little which can be stated with certainty concerning Diarmait mac Cerbaill's life and times.[2]

As a significant ancestral figure, whose purported descendants included many leading kings from the 7th to early 11th centuries, Diarmait appears in many genealogical collections and related materials. While it was once supposed that such materials were to be relied upon, many modern historians doubt whether genealogies can be taken as evidence for anything more than political aspirations and beliefs in the milieu in which they were compiled.[3] Reinforcing this view, Diarmait's recorded ancestry and family ties are believed to have been the subject of politically motivated changes in the centuries following his death.[4]

Ireland in the 6th century 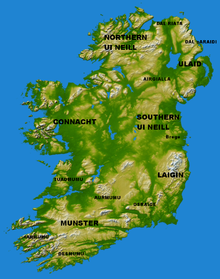 Ireland in the 6th century.[5]

Rise of the Uí Néill.

Grandsons of Neill, tribe of Conn

According to later writings, Diarmait was the son of Fergus Cerrbél, son of Conall Cremthainne, son of Niall of the Nine Hostages. As a great-grandson of Niall, he and his descendants were counted among the Uí Néill. The Uí Néill as such, the name means "grandsons of Niall", can only have existed in the time of Niall's grandsons, but its common usage may be later yet as an earlier term moccu Chuinn is attested as late as the time of Saint Columba (died c. 597), a great-grandson of Niall's son Conall Gulban. This, incorporating the Primitive Irish language gentilic or demonym moccu—the masculine term, the feminine is dercu—indicates membership of the tribe of Conn, presumed to be named for Conn of the Hundred Battles, a legendary figure, or perhaps a euhemerised divinity, claimed as the ancestor of the Connachta.[6] Moccu was later often misread or misunderstood by later writers, for whom gentilic names were alien and parentelic ones familiar, as a compound of mac and ua—son of the grandson of someone—an error likely to have resulted in many later genealogical confusions as members of the same tribe were turned into cognatic blood relatives.

As for the reality, Byrne says: "Diarmait's immediate origins are obscure and may arouse some suspicion.[7]" He notes that Adomnán calls Diarmait filius Cerbulis, son of Cerball, and not son of Fergus as the genealogies would have it. The same applies to other hagiographical materials, which again have Diarmait as the son of an otherwise unknown Cerball. Also likely to raise suspicion that Diarmait's genealogy is a later fiction, is the fact that unlike the majority of the Uí Néill, who traced their descent from, and were named for, sons of Niall, Diarmait's descendants were named for his sons.[7]

The Annals of Tigernach record that Diarmait celebrated the Feast of Tara, his inauguration as King, in 558 or 560. The previous King of Tara, according to the earliest lists, was Óengarb, an epithet meaning "extremely rough", presumed to refer to Diarmait's kinsman Tuathal Maelgarb. What followed the inauguration was "a surprisingly unpropitious reign for so famous a king".[8]

Diarmait was defeated at the battle of Cúl Dreimne (near Ben Bulben in modern County Sligo) in 560 or 561. This was the "Battle of the Books", supposedly the result of Diarmait's judgement in a dispute between Columba and Finnian of Moville. Columba, it is said, had secretly copied a book beloning to Finnian, and the matter of ownership of the copy had come to be settled by Diarmait, who adjudged in Finnian's favour, reportedly saying "[t]o every cow its calf and to every book its copy." Columba sought support from his kinsmen among the Cenél Conaill and the Cenél nEógain of the northern Uí Néill who went to war with Diarmait. This is a late tradition, and annalistic accounts claim that the battle was fought over Diarmait's killing of Diarmait of Curnán, son of Áed mac Echach (d.575), the King of Connacht who was under Columba's protection.[9]

Following this defeat, Diarmait lost the battle of Cúil Uinsen to Áed mac Brénainn, king of Tethbae in Leinster. Diarmait played no part in the great Uí Néill victory over the Cruthin at Móin Daire Lothair in 563. He was killed in 565, probably at Ráith Bec in Mag Line (Moylinny, near Larne) in Ulster by Áed Dub mac Suibni, king of the Cruthin.[10]

According to the later Irish historians, Diarmait was followed as King of Tara by Domnall Ilchegalch and Forguss, sons of Muirchertach mac Ercae, of the Cenél nEógain. More contemporary sources suggest that the Kingship of Tara all but disappeared in the years following Diarmait's death, and that it was not until the time of Domnall mac Áedo, or perhaps of Fiachnae mac Báetáin, that there was a High King of Ireland again.[11]

Adomnán of Iona, writing less than 150 years after Diarmait's death, describes him as "ordained by God's will as king of all Ireland." Given that the annals say that Diarmait celebrated the Feast of Tara, the pagan inauguration ceremony, Adomnán's words represent his view of kingship rather than the reality of Diarmait's life.[12] Most traditions portray Diarmait as in conflict with saints and holy men, notably Columba. A later poet has Diarmait say "Woe to him that contends with the clergy of the churches".[13]

A poem, Mairg thochras fri cléirchib cell ("Woe to him who contends with the clergy of the churches") in the Book of Leinster, is ascribed to Diarmait.[14]

Supernatural features in Diarmait's reign are not limited to prose and verse works or to lives of saints. Even the Irish annals include a reference to druid fences being created at the battle of Cúl Dreimne. The main subject for later writers and poets however, was not Diarmait's life but his death.

Diarmait is told by Bec mac Dé that Áed Dub, Diarmait's foster-son, will be his killer. Accordingly, Diarmait banishes Áed Dub.[15] Saint Ruadán gives the prophecy that Diarmait will be killed by the roof-beam of his hall at Tara. Diarmait has the beam cast into the sea. Diarmait then asks his druids to find the manner of his death, and they foretell that he will die a threefold death, by slaughter, drowning and burning, and that the signs of his death will be a shirt grown from a single seed of flax, a mantle made of wool from a single sheep, ale brewed from one seed of corn, and bacon from a sow which has never farrowed. On a circuit of Ireland, Diarmait comes to the hall of Banbán at Ráith Bec, and there the fate of which he was warned comes to pass. The roof beam of Tara has been recovered from the sea by Banbán and set in his hall, the shirt and mantle and ale and bacon are duly produced for Diarmait. Diarmait goes to leave Banbán's hall, but Áed Dub, waiting at the door, strikes him down and sets fire to the hall. Diarmait crawls into an ale vat to escape the flames and is duly killed by the falling roof beam. Thus, all the prophecies are fulfilled.[16]

Like tales are told of Muirchertach mac Ercae and Adomnán records that Columba prophesied a similar death, by wounding, falling and drowning, for Áed Dub.[17]