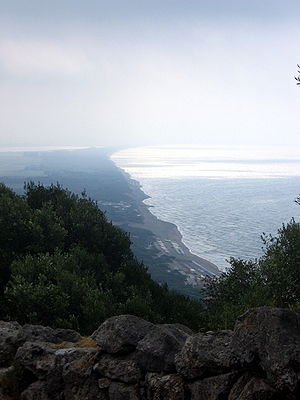 Vulci's coast, seen from Cosa
This article is about the Italian town. For the Spanish town, see Cosa, Spain. For the approach to restorative justice, see Circles of Support and Accountability.

Cosa was a Latin colonia founded under Roman influence in southwestern Tuscany in 273 BC, perhaps on land confiscated from the Etruscans (Velleius Paterculus 1.14.7; Livy Periochae 14; Strabo 5.2.8). The Etruscan site (called Cusi or Cosia) may have been where modern Orbetello stands; a fortification wall in polygonal masonry at Orbetello's lagoon may be in phase with the walls of Cosa. The position of Cosa is distinct, rising some 113 metres above sea level and is sited 140 km northwest of Rome on the Tyrrhenian Sea coast, on a hill near the small town of Ansedonia. The town experienced a hard life and was never truly a prosperous Roman city, although it has assumed a position of prominence in Roman archaeology owing to the circumstances of its excavation (cf. Dyson 2005, below). After the foundation, wars of the 3rd century BC affected the town (Livy 22.11.6; 27.10.8-9; 32.2.7; 33.24.8-9). Cosa seems to have prospered until it was sacked in the 60s BC, perhaps by pirates. This led to a re-foundation under Augustus and then life continued until the 3rd century. One of the last textual references to Cosa comes from the work of Rutilius Claudius Namatianus in his De reditu suo. In the passage 1.285-90, Rutilius remarks that by 416 the site of Cosa was deserted and could be seen to be in ruins. He further suggests that a plague of mice had driven the people of Cosa away.

In the 20th century, Cosa was the site of excavations carried out under the auspices of the American Academy in Rome, initially under the direction of the archaeologist Frank Edward Brown. Excavations (1948-54, 1965-72) have traced the city plan, the principal buildings, the port, and have uncovered the Arx, the forum, and a number of houses. Unexcavated buildings include a bathing establishment, but no trace of a theatre or an amphitheatre has been found. In the 1990s a series of excavations was carried out under the direction of Elizabeth Fentress, then associated with the American Academy in Rome. This latter campaign aimed at understanding the history of the site between the imperial period and the Middle Ages. Sample excavations took place over the whole site, with larger excavations on the Arx, the Eastern Height and around the Forum.

Within the city walls the urban area was divided into an orthogonal plan, with space allotted for civic, sacred, and private architecture. The plan represents a subtle adaptation of an orthogonal plan to the complicated topography of the hill. The forum was found on a saddle between two heights, with the sacred area, with the Capitolium, linked to it by a broad street. Recent excavations have suggested that the original layout provided for ca. 248 houses, of which 20 were intended for the decurions, and were double the size of the houses of the ordinary citizens. The larger houses were found on the forum and the main processional streets. 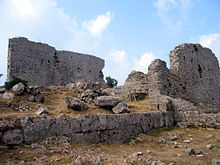 The arx or citadel of Cosa received some of the first serious treatment by Frank E. Brown and his team when they began the Cosa excavations in 1948. The citadel was a fortified hill on which were built several temples, including the so-called capitolium of Cosa.

Brown also discovered a pit (mundus) that he thought was connected to the first rituals of foundation carried out at Cosa in 273 B.C. On the arx were two temples, one the triple-cella building dubbed the Capitolium of Cosa, the other a smaller temple.

The city wall of Cosa was built in polygonal masonry and included a system of interval towers. The arx also had an independent circuit wall. 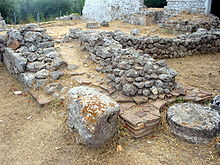 Basilica in the forum.

The forum was the public square of the city and was the site of many important structures, included a basilica and a curia-comitium complex, as well as buildings Brown termed atria publica, which have now been shown to be houses. The forum of Cosa is fairly complex in archaeological terms and many of the Republican structures were later built over with construction of the Imperial period.

The site has played an important role in the interpretation of Roman colonization during the Middle Republican period. The housing has been the subject of two extensive publications. One, by R. T. Scott (1993), deals with a series of small houses in the western part of the site. These occupy street frontages of around 8 metres, with open courtyard spaces and gardens in the rear. They bear a strong resemblance to similar houses of the second century BC at Pompeii. On the forum, the House of Diana was excavated and restored between 1995 and 1999. It was published in full by E. Fentress (2004), and a detailed report on the stratigraphy is available on the web (http://www.press.umich.edu/webhome/cosa/home.html) This was a much larger house, on a standard atrium plan, very similar to that of the House of Sallust in Pompeii. Built around 170 BC, it was entirely rebuilt in the Augustan period, from which we have a fine series of frescoes and mosaics. In the 50s, it seems to have become the house of Lucius Titinius Glaucus Lucretianus, and a small sanctuary to the goddess Diana was added in the rear garden.

Cosa under the Empire

Cosa appears to have been affected by an earthquake in 51, which occasioned the reconstruction of the republican Basilica as an Odeon under the supervision of Lucius Titinius Glaucus Lucretianus, who also worked on the Capitoline temple; however, as early as 80, Cosa seems to have been almost deserted. It was revived under the emperor Caracalla, during whose reign the portico around the forum and the odeon were restored, a Mithraeum was constructed in the basement of the Curia, and a sanctuary to Liber erected at the southeast end of the Forum. The new town did not last long, however, and by the fourth century only the sanctuary of Liber was periodically visited. In the early sixth century some occupation in the ruins is attested by pottery and the remains of a church have been found built onto the Basilica. Perhaps at the same time the Arx was occupied by a fortified farm, subsequently transformed into a small fortified outpost under Byzantine control. This was abandoned in the late sixth or early seventh century. It is possible that the intermittent nature of the occupation of the town was due to the fact that, already in the early Empire, malaria was hyperendemic on the coast of Tuscany.

Cosa appears in some documents dating from the 11th century, although a 9th-century occupation is suggested by frescoes at the abbey of S. Anastasio alle Tre Fontane in Rome, recording the capture of the site by Charlemagne and Pope Leo III. By the end of the tenth century a small cemetery was found next to a church built over a temple facing the forum. The town is recorded as Ansedoniam civitatem in a privilege of Pope Gregory VII (1073-1085).

Occupation of the site began with a few sunken-floored buildings, but by the eleventh century it was concentrated on the Eastern Height, now surrounded by a double bank and ditch. In the twelfth century a tower was built in the centre of these fortifications, with a large cistern on two sides. That this cistern was subsequently used as a prison is suggested by graffiti on its plaster lining, one of which gives the date of 1211.

The castle, belonging to the Aldobrandeschi family in 1269, was destroyed by the Sienese army in 1329, on the pretext that it was occupied by bandits. A catapult or trebuchet base found on the Eastern Height may have formed part of the defences at this time. The site remained deserted after this time.

A large villa complex in the Ager Cosanus at Settefinestre was excavated by Andrea Carandini in the 1970s.