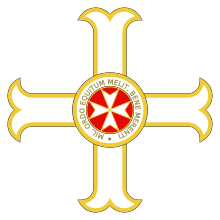 The Order of Merit pro Merito Melitensi of the Sovereign Military Order of Malta is a knightly order of merit established in 1920. It is awarded to men and women who have brought honour and prestige to the Sovereign Military Order of Malta or actively promoted Christian values or works of charity in the Christian tradition as defined by the Roman Catholic Church. Although, strictly speaking, honorees become knights or dames, they are not invested in a religious ceremony as knights and dames of the Order of Malta itself (which is a military order of chivalry); therefore the Order pro Merito Melitensi (sometimes "Melitense") may be bestowed upon non-Catholics. Conferees include prominent statesmen, such as Ronald Reagan (who received it while still in office) and George H.W. Bush. The Order of Merit has certain ranks (such as commendatore or knight commander) no longer used in the Order of Malta, and has no nobiliary grades. In this way it is comparable to numerous orders of merit around the world, including the Papal orders.

The Order pro Merito Melitensi has the following classes:

The Cross is bestowed upon both civilians and military personnel, having several grades:

N.B. :The decorations there are "with Swords" for serving military and without Swords for civilians.

When awarded to ecclesiastics, it has the same cross as awarded to civilians and military personnel. Nevertheless, the ribbon is here black crossed with two thin red lines and there are only two grades :

This class has three grades : Gold, Silver and Bronze.

There are only three different types of ribbons for both the medal and the crosses.